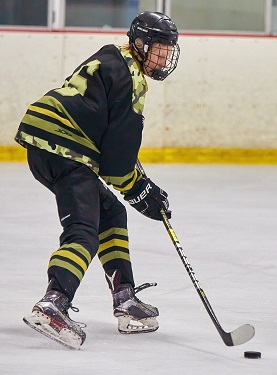 The Sand Sharks continue to improve, Minute Men get demolished by the Sting Rays.

Our first game of the night was the Aces vs the Sand Sharks and it would prove to be another game where the Sharks come up short, but continue to improve. A tightly contested first period saw the two teams trade goals with the Aces striking first on a looping shot from Jack Zerfass mid way through the period. The Sand Sharks would get the equalizer with about three minutes to go in the stanza when Peyton “Scrappy” Brisley would score his first goal of the season on a sweet tip in off a Matthew Wallace (s) wrister. In the second period The Aces pulled away scoring three unanswered goals. Connor Johnston Ferris would intercept a poor clearing pass and rip one over the shoulder of Gaffney to break the tie just seconds into the period. No scoring for much of the rest of the period until Delaney Zerfass sends Alex Macris away for a danglers delight finished off with a between the legs far side snipe and the Aces are up two. The Sharks shot themselves in the fin when they let Macris ripple the twine again on a nice feed from Jack Zerfass with just 6.8 seconds left in the second period. In the Third Period the Sharks went to work and scored tow to answer the Aces and close the gap to one. Two minutes after the Aces strike, Finn Smith gets a nice tick tack toe goal from Lex Petrov and Jonathan Cholnik. At the halfway mark Cholnik pots one of his own on a nice set up by Jayveer Doad and the score is 4-3 Aces. Five minutes later Macris gets the hat trick goal to spread the lead back to two. Julien Mesa reclaims that goal with a nice score from newcomer Landon Sedor (s) and Matthew Wallace. A mad scramble to pull the goalie and tie the game fell short and we have a 5-4 final in favor of the Aces. PHillip Tate continues to impress as he stops 49 of 53 shots to keep his save percentage over .900, both teams were scoreless on their power play attempts.

In game two it was a Sting Fest as the Sting Rays put the Minute Men to bed early and often. The Rays would score Seven unanswered goals before the Men could muster a goal for themselves. The Rays got 5 in the first period including two from newcomer Paul Johnson, as well as tallies from Babcock, Poweska and Chandler O’Dell. In the Second Period O’Dell snipes two more before Burgess can at least get one for the Minute Men, only to be answered with two more O’Dell goals and the Rays are well on their way to a major ripping of the Militia. Two more for the Rays to Start the Third Period and the next goal for the Minute Men is meaningless, (Frontiero) thanks to Babcock and O’Dell. Savannah Scianna would add the lucky 13th goal for the Sting Rays and the end of a horrid night of hockey for the Minute Men finally comes. O’Dell winds up with five scores, Babcock with three, Poweska with two and Johnson with two. It was the biggest defeat for the Minute Men in the teams history.