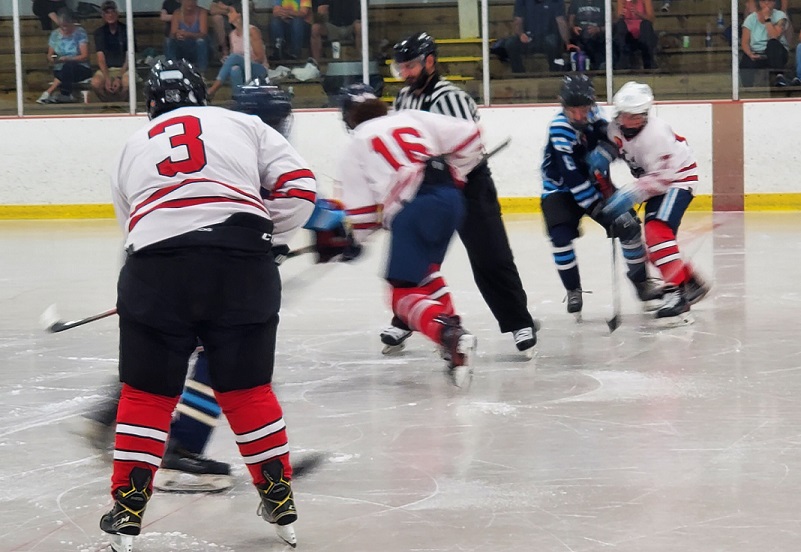 Amidst lost luggage and non intentions, the Sharks enter the Final Series vs the Aces in a state of dis array and the Aces make them pay for it.

We are here at the culmination now of the FIHL Inaugural Season. A best of five series for the cup and you have heard the hype and have seen the teams all season but now it is time. For game one, one team was ready it seems and the other was not. Sharks starting goaltender Dom Guardino, having stepped off his flight from little Havana was informed his gear did not make the trip. With borrowed gear, Dom allowed 4 goals on the first six shots and the Aces were off and running. Maddox Fox got the Aces started and then Nathan Salazar would net the natural hat trick, all of the goals set up by Josiah Martinez. The Sharks would get two quick strikes back mid way through the period as Beaudy Beaudin and Cameron Smalley were the net gainers and it looked like the game was settling down as Dom was settling into the new pads.

In a surprise move, the Sharks replaced Gaurdino with Thomas Reilly who did not have any intentions of playing and also had to use the replacement gear. The Sharks were hoping to spark the team, but it also took Reilly a bit to settle in and he gave up four goals as well including one in the final seconds of the stanza. Jaxon Law started it off with a nice rush down the ice for the break in and snipe short side. Gus Komarek would get the next followed by Frosty The Goal Man and Josiah Martinez. No answers from the Sharks amid more turmoil on the bench led to starting the third period down 8-2 in game one– not a good start.

The Sharks also started the third down one more player as Nathan Souza was sent to the showers for undisclosed reasons and one had to wonder, what is going on in Sand Shark Land? The Sharks looked much better in the third, dominating ice time and out shooting the Aces 28-13, racking up three goals in the second half of the period and for a moment it looked like a come back was in the works. Beaudy Beaudin nailed down two for the hat trick and Smalley picked up his second, but another goal from Josiah Martinez some where in between kept the lead safely at four. That is how it would end, Aces 9, Sand Sharks 5. Both teams failed to convert on the power play and the Sharks out shot the Aces, 55-43.

Game Two and Three game times have been adjusted due to rink maintenance issues. The Schedule is below. Also, Our split the pot is at 100 dollars and the winning ticket will be pulled at the end of this series as we hope to raise a big pot for the season finale!

Big News will be forth coming on the season ending banquet and FIHL Season II very soon!! See you all this weekend!!