Back in Ellenton for Week 8!! 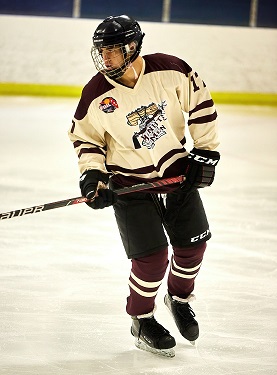 The FIHL is on the road this week as games fifteen and sixteen of the inaugural season will be played in Ellenton. Two epic match ups take place as only one team is happy with the standings, that being the Sand Sharks. The Sharks remain undefeated but have had their share of close calls and close games, none closer then their week two match up against the Minute Men. In that game the Sharks were stymied at every corner of the ice as the Minute Men clogged the made every aspect of the game difficult. The result was a 6-3 Minute Men lead at the end of two periods. In the last ten minutes of that game however, nine goals were scored leading to a 9-9 tie that was broke on the first Sand Shark shot of the overtime session. That game still stings for the Minute Men, and it started what would be the longest losing streak in FIHL History at five games. The Minute Men snapped that streak last week with a hard fought win over the Aces and are looking to be the first team to hand the Sharks a loss. Minute Men Captain Max Mondo, (Pictured), will lead the battle when the puck drop on this tilt at 5pm EST.

In the 7:30 game, the match up has the Aces and Sting Rays battling for the second spot in the standings. The season series between the two teams stands at one win each. Both teams boast of veteran players mixed with young guns, as well as solid goaltending on both sides. Chandler O’Dell leads the Sting Rays with 11-6-17 totals and the Aces Gavin Frost is right behind him with 5-10-15 totals. Both players are in the top ten of point getters in the FIHL, a top ten dominated by Sharks. The Aces will be looking to solve late game break downs and a three game losing streak. The Sting Rays look to get right back to winning after a disappointing performance against the Sharks last week. A Rays win will give them sole possession of second place and an Aces win does the same if the Sharks knock off the Minute Men again.

Both games can be seen on LiveBarn.com. Credit for photograph to Francis Fedor, Francis Fedor Fotography (zenfolio.com)