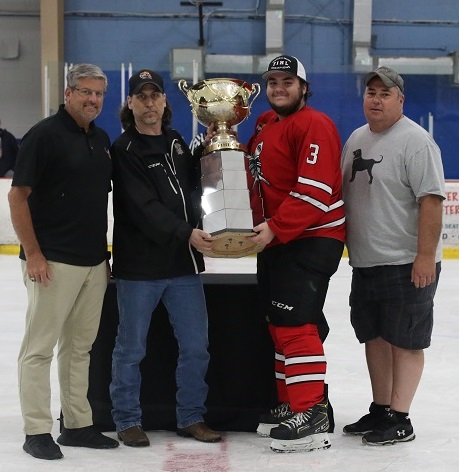 A short benched Aces in game four tried to keep pace with a full Sharks squad, but in the third period, the damn broke.

It was a quick strike in the first period just two minutes into game four that had the Aces wondering just how long of a night it was going to be. Jacob Dunlap got that ice breaker unassisted as he went through the Aces D like a stick of butter through a warm knife… yes, I just wrote that. Nolan Borek would add another goal three minutes later and the Sharks were off to a quick 2-0 lead in the potential cup winning game. But the Aces settled down albeit giving up some twenty odd shots to their own eleven for the reminder of the period but Jacob Otto stopped them all–except for one as Hunter Gillum would slide a puck that never left the ice, past the old school stand up net minder with just forty second left in the stanza. The period ends 3-0, Sharks in control.

In period two the Sharks open it up with two more quick strikes at one minute in and two minutes in. Patrick Dary stuffs in the one timer from Tanner who was parked behind the net and Gillum would net his second of the night. A 5-0 deficit had Aces fan’s hanging their heads but at the midway point the Aces top goal scorer of the playoffs would bang one home and the Aces were on the board. Nathan Salazar set up by Frosty the Goal Man gets the shot off and stuffs in the loose rebound on the third attempt and the Aces bench came alive. Two more shifts of sustained pressure from the Aces top line didn’t yield what they had hoped for and at the midway point the Sharks Borek scores again to restore the five goal lead. The Aces pressed on though and were rewarded with a last second goal of their own as Salazar does it again with a one timer off the stick of Martinez who had a whopping seventeen assists in the playoffs. So the Aces and Sharks head to the locker room with the Sharks up 6-2.

The game was within reach, the Aces had good sustainable pressure at times and had it not been for a a little more puck luck, the score would have been a little different, a little closer. This is the FIHL, and a game is never over until the fat lady sings. A comeback could definitely happen except for one thing– the Sand Sharks had no intention of the out come of this final game ever being one of those games that could go either way, and so they brought their own fat lady… and she was warming up. Four goals in the first half of the third period to only one for the Aces and it was quickly a 10-3 game. Resignation was beginning to set in. Tanner, Souza, and Beaudy, would light the lamp before Frost could pot one for the Aces only to have it answered by the Sharks with a Smalley Tally. The Sharks would score two pairs of goals in the second half just seconds apart from each other and the Aces were spent. Souza and Borek less then a minute apart with eight minutes to go and Beaudin and Bobowicz thirty two seconds apart with three minutes to go. Fourteen to Three. All that was left was to watch the final minute of play tick down….

After the final horn, the Sharks celebrated at their end and the Aces at their end. The trophies were brought out and set up complete with Minute Men escort. The Finals MVP winner was Nathan Salazar for leading his team with eight goals in the four game finale, helping his team stay in every game and showing grit and fortitude on every shift. Truth be told there were many MVP’s in this series. Josiah Martinez with his plethora of assists, Cam Smalley and Beaudy Beaudin with their eleven and twelve points respectively in the series. But Salazar transcended all of it it seems as he scored nine total points in the finals, fifteen in the playoffs– which was just three shy of his entire regular season point total in twenty five games–the choice was clear. The Sharks having no Captain seemed to have voted for one right there on the spot as some one had to be the first to hoist the FIHL Cup. Coach Beaudin announced that Patrick Dary would indeed be that man and the Sharks erupted. A favorite of all and a locker room maker, Dary’s bearded face was all smiles as he posed for the pictures and brought the cup high over his head back to his team mates. A fitting choice as Dary would end up with the first ever cup winning goal in the FIHL. The Sharks are Champs, adorned in champions ship hats, the cup was passed around and pictures were taken. But about that final minute…

…in that final minute of play both teams seem to acknowledge the competition was over and the game transcended into a volley puck match between Otto and Rielly. The two teams netminders were being set up by their team mates to play a little shoot and hope to end the season–something you will never see in pro sports. It made the difference between the game being a bitter blow out to a fond farewell where both teams knew, this season had come to an end… and it was a blast of a season. The FIHL provided experiences no other league can or ever has in the state of Florida for its players, and the players on the ice seemed to acknowledge that by celebrating the final minute of a long tedious season together. The Aces did not allow a final score of 14-3 frustrate them on what was a great season for them filled with many personal and team accomplishments. The Sharks didn’t gloat over what was an strangely amazing season despite the crazy roster changes all the way through. On the ice was friendship and sportsmanship. A lesson for everyone watching and a fitting end to the the inaugural season of a league that was never supposed to happen. The Sharks are Champs, adorned in champions ship hats, the cup was passed around and pictures were taken. Later that evening at McDivots, Sharks and Aces alike shared a meal and shown off their trophies for all to see and again, it was together. For this reporter, it made it all worth the while… FIHL Forever.