Dary Scores Two for the Debut! 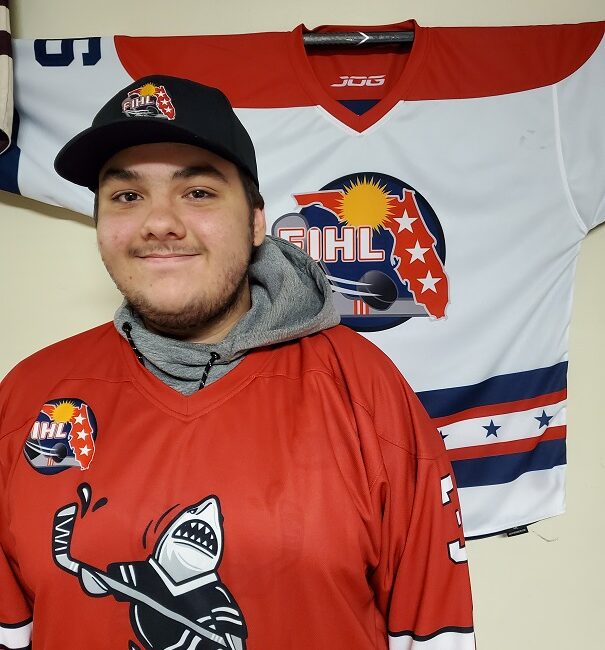 The FIHL was in action on Saturday, February 20 at TBSA in solid matchups that saw the Sand Sharks take on the Minute Men and the Sting Rays versus the Aces.

In the first game, the Sand Sharks defeated the Minute Men 7-4 in a tight battle. The Sand Sharks got on the board first with goals by Nathan Souza and Christopher Maybury in the first period. The Minute Men roared back in the second period with two goals by Wyatt Frontiero and one by George Brkljacic to take a 3-2 lead with 2:57 left in the period. A little over a minute later, the Sand Shark’s Patrick Dary tied the score at 3-3, and sixteen seconds later he scored again (assisted by Maybury on both goals) to give the Sand Sharks a 4-3 lead heading into the third period. The goals marked a stellar debut for Dary and the new look Sand Sharks.  They would add to their lead in the third with two goals by two more players making their Sharks debut. Cameron Smalley scored on a nifty back hander and Ryan Piper (who also had two assists in the game), kept any comeback by the Minute Men at bay.  The Minute Men’s Brkljacic did add one more for the Men, his second goal of the night. Shots on goal were Sand Sharks 56, Minute Men 39.

In the second game, the Sting Rays and Aces competed in a fast-paced, high-scoring game that saw the Aces defeat the Sting Rays 12-7. The Aces took a 4-0 lead in the first period with two goals by Josiah Martinez and goals by Gavin Frost and Nathan Salazar. Chandler O’Dell put the Sting Rays on the board when he scored with 5:37 left in the first period. The Aces opened the second period with a goal by Gus Komarek before the Sting Rays scored three consecutive goals (Braeden Blosousky, Erik LaFlamme, and Kane Eanes) to cut the Aces’ lead to 5-4 with 9:29 left in the period. With the Sting Rays recent history of coming from behind, the Aces went right back to work and added two more goals in the second (Salazar and Cameron Smalley) to take a 7-4 lead going into the third period. The Aces took a 9-4 lead on goals by Komarek and Martinez (hat trick) but the Sting Rays refused to die and fought back with three consecutive goals (two by Kane Eanes for the hat trick and one by Blosousky) to cut the Aces’ lead to 9-7 with 5:55 left in regulation. The Aces answered again with three goals in the last three and a half minutes of the game (Komarek for the hat trick, Martinez, and Smalley) for the final score of 12-7. Shots on goal were Sting Rays 39, Aces 64.