Draft Complete! What a night! 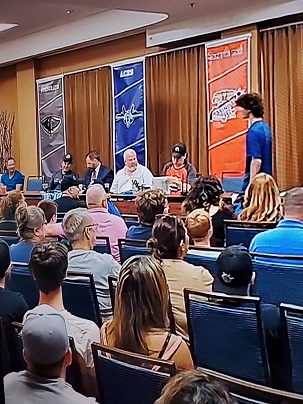 The FIHL’s second annual draft is in the books and season II, “The Sequel” is getting ready to ramp up.

Last night at the Courtyard Marriot in Oldsmar Florida was the place to be. The FIHL held it’s second annual draft to create it’s four teams while also creating a special night for the players. Both new and returning players were in attendance as the Marriot hosted an incredible night of fun food and festivities. Over twenty prizes were raffled off from tape rolls, to sticks and locker room blue tooth boom speakers and when it was all over, every player went home a winner.

Notable events that took place last night was Joshua Guay securing the first overall pick for the Sting Rays, Sean Gaffney was the final pick in the draft for the Sand Sharks and we had a trade of picks and a total of four players changing teams from last season. The trade was made in the fifth round as the Minute Men sent their pick to the Aces for the Aces last two picks in the draft. The Aces secured the third Pensacola player to grace their roster in team history with the pick by selecting Chase Sterling. Gavin Frost and Jaxon Law, the previous Pensacola players will not be returning this season as they have signed with the TBJL Sahof league and the ECEL. The Minute Men used the picks to snap up Chris Cowan to help fill holes on D that were left by Max Mondo and Jack Vitchock. Mondo is knee deep in boot camp with the Naval Academy and Vitchock will be playing in Germany this season.

The other player changing teams will be Savannah Scianna as she jetted from the Aces and landed in Sting Ray country for a major defection. Another exiting Ace was netminder Jacob Otto who was scooped up by the Sand Sharks. Last was another steal by the Sharks as they picked up now former Minute Man Hunter Chace–and his father Kevin as well for coaching duties.

All in all it was a fun night for the players which is what it is all about. Below is the complete draft pick by pick. There a few holes yet to fill so if you want to play in the best youth league in the United States, (complete unbiased opinion by the editor), just go to Tampayouthhockey.com and register!!