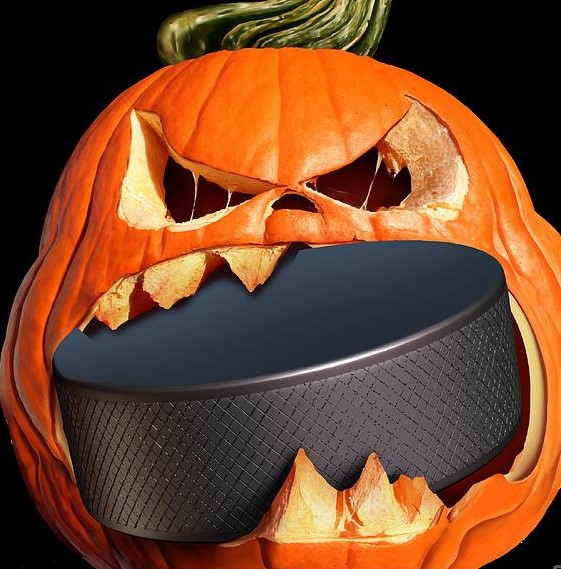 The Sharks suffered a horrific Hallows Eve defeat while the Minute Men own longest win streak of the season early.

It was a spooky game one for the FIHL’s 2nd Annual Halloween Spooktackula at TBSA filled with the first game filled with scary events that left the Sharks toothless. The Aces brought a skeleton crew of just eight skaters which turned out to be all they needed and Phillip Tate recorded the first shut out in FIHL history stopping all seventeen shots on net–another FIHL record. The Aces took off early scoring two goals in two minutes to grab a 2-0 lead. Michael Macris would score his only goal of the night and Connor Johnston-Ferris would score his first of four on the night. Zach Tate would close the period with two quick strikes in the last two minutes, on his way to hat trick and the period ended 4-0. Ferris would get the Natural Hat Trick in the second half of the second period along with goals from Connor Hill (s) and Ashton Gibson (s) and the score at the end of that stanza stood at 9-0. The five goals were scored in less then a five minute span, sending the Sharks to the tuna factory. In the third period the Sharks almost got one but Tate held the door shut. That was followed by four different scorers for the Sharks. Gibson with his second on the night, Alex Macris, Tate finishing off his hat trick and Hill with his second on the night. The Aces went two for two on the power play while the Sand Sharks went zero for one. Sean Gaffney faced sixty shots as the Sharks played a better third period, but for this Hallows Eve, the number 13 for a final goals against was very fitting.

In the second game, the Minute Men did what needed to be done to have a shot at the win, shut down the hottest player in the league, Chandler O’Dell. They did just that and held O’Dell pointless until the Sting Rays first goal of the game late in the second, scoring five of their own before hand. In the first period the Minute scored very quickly just 28 seconds into the frame when George Brkljacic would score on a Michael Alicea rebound for his first of four goals on the night. It would be almost the end of the period before the second score would come when Julian Wojcik would snipe a wrister over the glove hand of starting netminder Jason Cribbs. The period ended 2-0 Minute Men. In the second period Jonny Motta would slide a dish over to Braeden Spencer who was quick to smash it off the pipe and in for his first goal as a Minute Man and his first goal in the FIHL! Kyle “LeGrande” Finelli would score on a one timer in the slot from the Brkljacic slick feed and for his next trick Georgie Boy would score his second of the night on a breakaway to make it 5-0. The Sting Rays finally get one past John Thompson with just three minutes left as Chandler O’Dell scalpels a nice backhand toe shot over Thompsons blocker shortside for the surgical goal. That ended the period 5-1. In the third period the Sting Rays made a quick strike as Noah Gawel slams home a puck right off the stick of Connor Hill as he was trying to intercept a pass and suddenly a three goal deficit with an entire period to play doesn’t look so bad. Seven minutes later number 73 would get the hatty and put the Men up by four on a shorthanded scream down the ice. The Sting Rays answered within minutes however as Michael Babcock (s) would get a nice goal as the Rays power play works the puck around, assists going to Matthew Kramer and Noah Gawel. Brkljacic gets his fourth goal on another break away as Kyle Fanelli would send him away after receiving the puck from Ryan “Big Foot” Compton. The Rays capped off their scoring when a Michael Babcock pass attempt goes off of a Wyatt Frontiero skate and slides past the unexpecting Thompson with :42 ticks left on the pumpkin to make the final score, Minute Men 7, Sting Rays 4. The losing netminder was Ty Schmidt who split duties with Jason Cribbs and the Sting Rays were one for three on the power play. The Minute Men were 0/4 on their power play opportunities and were the last team to allow a power play goal this season, which they did tonight. They are however winners of three in a row, the longest win streak of the young season. That’s all from the haunted house known as TBSA!!