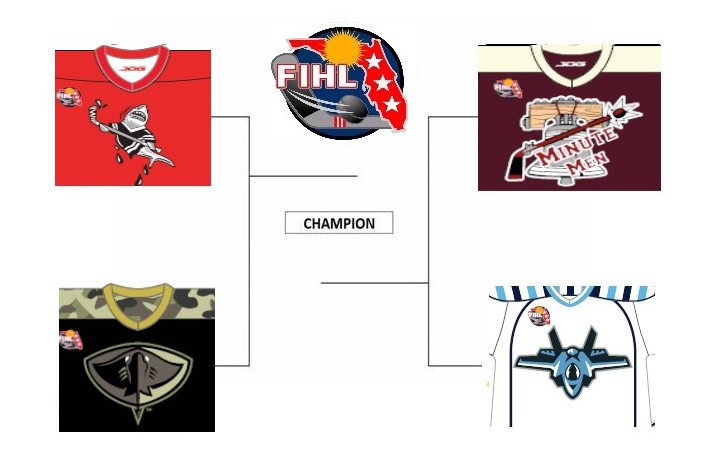 Saturday Night the FIHL closed its second season with what would turn out to be a preview of the first round of FIHL Playoffs. The Sting Rays and Sand Sharks battled for final seeding but the Rays were without their top two pillars on the team, Chandler O’Dell and Matthew Babcock. O’Dell was skating in north Tampa vying for a roster spot on the Tampa Juniors while Babcock was called up to North Carolina for business. The Sharks were ready and made quick work of the Rays grabbing a 4-0 lead in the first period and never looked back, destroying the Sting Rays 13-2. In the final game of the season, the Minute Men were facing the Aces. With the Sharks victory the Minute Men needed a win to hold free and clear first place and claim the Presidents Trophy. They too were without their top two D, men in Jonny Motta and Wyatt Frontiero. Both were where Chandler O’Dell were, vying for a spot in the Tampa Juniors organization. Jonny “Sweet Potato” Motta was indeed offered a contract and the FIHL would like to congratulate him on the achievement! So the Men had to rely on the up and coming players and they delivered. Six different goal scorers for the Minute Men in the first period would lead to Julian Wojciks first ever hat trick in the FIHL, along with Side Show Bobs hat trick filling the void on D, and the Minute Men grounded the Aces 10-2. That caused a cascade seeding in the final standings that had each team two points ahead of the team behind and a rematch of last seasons first round.

In the Inaugural season the Aces topped the Minute Men in round one after the Minute Men took game one. Game two was extremely controversial and had the Aces come out on top setting up a game three in which the Minute Men left their muskets at home, and they fell to league scoring leader and eventual Championship MVP, Josiah Martinez and Nathan Salazar. The Sand Sharks battled the Sting Rays hard but got swept two games to none in what was the best two games the FIHL has ever seen, except for maybe tonights tilt between the Aces and Minute Men.

First we cover Game one between the Sting Rays and the Sharks. The Sting Rays could only muster five players for this game, and one had to ask, where were the Sting Rays? Armed with rookie netminder and sub Quinn Badeau and Preston Pohnel, the Rays actually held a 2-1 lead at the end of the first period. Beaudy Beaudin provided the offense for the Sharks while Pohnel had the goals–both unassisted for the Rays. In the second Beaduin would tie the game up unassisted himself, leading to six unanswered goals by the Sharks who began to pick apart the exhausted Sting Rays. Shots were fairly even in the game as the Sharks did outshoot the Rays 66-54, but the Sharks went 2 for 3 on the power play and got hat tricks form their captain, Matthew Clark, and Beaudy Beaudin, the only rostered on last seasons Champions Sharks team. Pohnel would end up with a hat trick as well but that would be all the Rays would get, as they drop game one 9-3. After the Game the Rays vowed revenge and said Game two would have a full bench and would not be allowing a chance of a Sharks return to the finals. We shall see…

In Game two the battle of all battles took place as both teams house most of the top players in the league as well as a collection of impressionable developing players. The Aces would draw first blood fairly quickly scoring two goals before the halfway mark of the first period. Connor Ferris Johnston picks up a sweet feed from Michael Macris out of the corner and performs the traveling drive by snipe show on John Thompson and five minutes in the Aces are up 1-0. Two and half minutes later the he returns the favor to Macris and sends the minutes younger twin on a breakaway that he slips past the FIHL veteran Thompson, making it look easy all the way. Aces up 2 zip. The Minute Men finally catch an opportunity with just under two minutes to go when Jack Zerfass gets whistled for a hook and the Men send out Power Play unit. They deliver as Jonny “Sweet Potato” Motta standing all alone in the paint taps in a Andrew Harmon rebound for the goal and the period ends 2-1. The Minute Men tie it up in the second about halfway thru the stanza when Harmon shovels home a pass out front off the stick of Joey “The Big Dog” Soroukas. It would only last seconds though as Connor Ferris rips a wrister from the top of the circle that Thompson gets a piece of, but falls into the net regardless and the Aces are back on top, 3-2. Julian Wojcik who had his first hat trick the night before would tie the game up with four minutes left in the period and the second session ends all tied at three goals a piece. In the third period the Minute Men came out firing. armed with a power play thanks to a lst second penalty to the Aces top penalty killer in Ferris, the take the lead. Michael “Side Show Bob” Alicea kicks a clearing attempt right to Motta who rips it over the shoulder of the Aces young net minder, Keegan Lentz. Seconds later Side Show Bob would get his own snipe and the Men suddenly had a two goal lead. The Aces answered however with a goal of their own to cut the lead in half in mere seconds. Another end to end rush off a poke around in the Aces zone by Andrew Klingel and Michael Macris makes the circus move work and warps the puck around and past the Minute Men goalie. The Aces would tie game at five goals each when Connor “The Mountain” Hill shovels home a loose puck out from after a mad scramble and it is now a half a period contest for the rights to game one. As tempers flared minutes later in the heat of battle, the Minute Men took advantage of another power play and loaded the cannon known as Wyatt “That’s Crazy” Frontiero. The shot overpowers Lentz as he slides across in an attempt to stop the blue line bomb and the Men had the lead back. The Men worked the perimeter of the zone as Side Show and Motta passed the Cannon Ball around till it go to the cannon. They open it up to two once again on a sick 4 on 4 back door one timer from Andrew Harmon. The goal was set up by Alex Noti and would prove to be the game winner. The Aces got a power play goal of their own with two and a half to go, and pulled the goalie thereafter but the Men held them off and escaped with the narrow win in game one. Alex Macris would score on a similar perimeter passing play with Connor Hill providing the screen after starting the play and Macris blasted it from the middle of the blue line. Both teams had four power play opportunities but the difference was the Men went 3 for 4 while the Aces only buried the late one. The Aces also hit a few pipes in this one and anyone who thinks this is a guaranteed sweep doesn’t know the history between these two teams.

So there you have it. Round one will resume on May 21st due to scheduling issues and if neccessary, will wrap on the 22nd and then on to the finals! Check your local listings for game times but hurry, both games are almost sold out already, so get your tickets now!