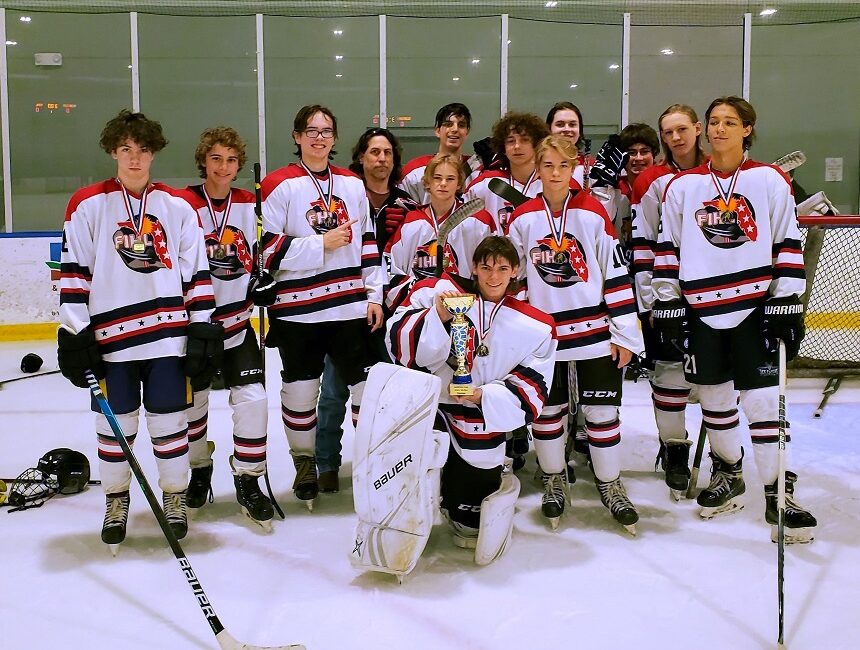 A last minute entry into the Summer Classic Wesley Chapel Tournament Sunshine Cup yields Gold for the FIHL. Joey Soroukas of the FIHL’s Minute Men is the man to thank as he pushed the commish about the Sunshine Cup.

“He really wanted to play and while I had plans to relax for the first weekend in forever… I had to send the email out. How could I say no to Joey Soroukas?”

So the email went out and very quickly twelve players were rostered and ready to play. Seven Minute Men, three Aces, two Sting Rays and one new comer headed to the Sunshine Cup to have a little fun, gain a little ice time and play some hockey.

In Game one it was obvious the rust was needed to be shaken off as the skaters missed plays and tripped over blue lines while John Thompson allowed seven goals on seemingly simple shots. It was a game where the last team to score would be the winner as the Scorpions net minder was also off his angles and that rang true as the Stars fell 8-6 thanks to an empty net goal. The Scorpions were headed up by Minute Man Ryan Compton and Sting Ray Sam Hanks, and they would face their FIHL mates four games later in the final.

Game two saw things settle down as the Stars dominated ice time but still missed a lot of opportunities. The highlight of the game was a sick between the legs pass across the crease from Wyatt Frontiero to Jaxon Law for the easy tap in that put the nail in the coffin. Frontiero and Law was a combo that was common this weekend and the Stars rolled to a 7-4 win over the Scorpions B team.

Game three was against the big bad Attack from TBSA. The line up was shuffled a bit for that game and with the score tied at nothing nothing headed into the third it was anyone’s guess who would blink first. The Attack did as Wyatt Frontiero would score on a blue line bomb to break the dead lock. The Stars jumped out to a 3-0 lead but the Attack came back with two quick strikes to make it 3-2 and we had a game! Two more late goals for the Stars sealed it though and the Stars win 5-2.

Game one of the playoffs was against the Scorpions B team and the Stars crushed the team led by Devon Barkett of the Sting Rays, 11-4. Gavin Frost had four tallies to highlight the drubbing as the score at the end of two periods was 11-1. The Stars worked on puck movements and passing in the third but gave up 3 goals and score none to create the final score.

The Championship saw the return of Hanks and Compton and was a battle for two periods as the Stars potted one goal in each stanza. A three goal out burst in the third period to the Scorpions one tally sealed the Cup for the FIHL. Jaxon Law had the hat trick after going without a goal in the previous game to lift the Stars to victory.

Highlight’s of the Sunshine cup were the play of Nate Salazar who played with Frontiero on D, continuing the massive progress as a player that won him the FIHL Finals MVP. Then there was John Thompson playing excellent in goal in that final game to secure the cup for the Stars, another milestone for the mullet man. But maybe the biggest highlight was that the fella that caused the whole tournament to even happen, Joey Soroukas scored two goals in the tourney. The goals matched his entire season total from his first season in the FIHL. He was rewarded by taking the cup home with him.

“Joey played great and it was good to see the progress from a long season show up in what turned out to be a great weekend of fun hockey.”

And there ya have it, a fun weekend and more ice time for players of the FIHL, until next time, keep shooting!