Gifts abound in a FIHL Christmas as Sharks win again while Rays and Men visit the O.K. Corral! 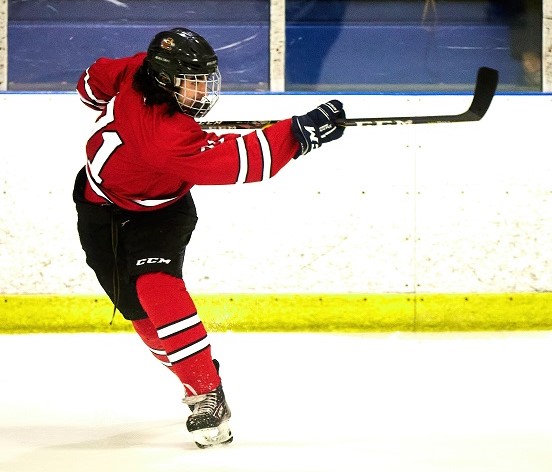 The FIHL celebrated Christmas with a Family Skate on Saturday, December 19 at TBSA followed by matchups between the Sand Sharks and Aces in game one and the Sting Rays and Minute Men in the nightcap. The Family skate was well attended and many gifts were raffled off!  Our Best Santa was Coach Komarek of the Aces, our best Elf was Taylor Cowan, Sister of the Aces D-Man Chris Cowan, and our best sweater was Camella Frontiero, team manager for the Minute Men!  A good time by all!!

In the first game, the Sand Sharks and Aces played a tight game that saw the undefeated Sand Sharks come out on top 4-3 in their lowest scoring affair of the season.  The Sharks took a 2-0 lead on their first two shots on net, starting the FIHL debut of Connor Sheridan out on a sour note. The quick goals by Anderson Libby and Dave Beaudin made it look like another typical night at the office was enroute for the Sharks, but the Aces had other plans.  Josiah Martinez cut that lead to one goal with 11:00 left in the period before Christopher Maybury gave the Sand Sharks a 3-1 lead on a short-handed goal with 1:05 left in the first period. The Aces scored the only goal of the second period when Gavin Frost netted one to cut the Shark’s lead to 3-2. In the third, the Sand Sharks went ahead 4-2 on a goal by Griffin Kirkham with 17:46 left in the third period, but the Aces cut that lead to one goal yet again when Martinez scored his second goal of the game on a power play with 5:43 remaining in regulation. Both teams battled in the remaining minutes of the game, but the Sand Sharks held on for the 4-3 win. Shots on goal were Sand Sharks 52, Aces 50.