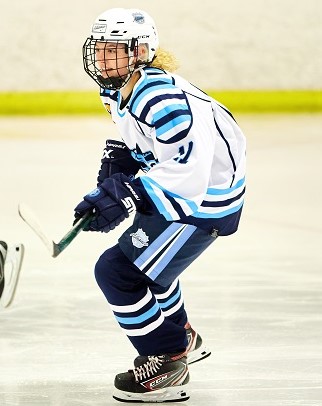 Two exciting games with exciting finishes this week in the FIHL!

Game one this week was looking bleak when neither rostered net minder for the Sting Rays reported for duty. With five minutes to go before game time, Commissioner Frontiero enacted for the first time, the FIHL Emergency Goaltender Clause. Enter Renn Ronidella, the back up netminder for the TBSA Men’s league team known as the 8 Balls. The thirty seven year old lives minutes from TBSA and was indeed ready for puck drop, oxygen tank in tow, which he would need thanks to the eighty shots he would face at the hands of a very hot Sharks team. The Sting Rays actually scored first in this one as Evan Kirk would begin what would be an FIHL Career best night for himself. He would go the length of the ice with jukes and jives burning Gaffney for the games first score, and the games only power play goal. Jonathan Pohnel had the assist. Less than two minutes later the Sharks bite back when Phenex Hauver slams home a Alek Qadri rebound and the game is tied. Hunter Chace grabbing an assist as he sent it down the wall to Alek. Qadri made his debut this week for the Sharks and negotiations are ongoing for a full time position. He would score the next goal for the Sharks on his way to a hat trick, on a nice passing play by Lex Petrov and Jonathan Cholnik. The first period ended with the Sharks up, 2-1. Both teams would pot two in the second stanza, with the Sting Rays scoring first to tie the game at two. Kirk does it again, this time on a nice feed from Joey Poweska. Once again however, the Sharks answer quickly and within a minute, they regain the lead on Qadri’s second of the night which he performed with no assist. Almost exactly one minute later, Qadri completes the hat trick when Frasquillo sends him off to the races, and he cashes in for the Sharks 4-2 lead. The Sting Rays would cut the lead in half on Kirks third goal, his first hat trick in the FIHL. Tristan Barnard sends the pesky 2006 born player up the middle and he manages to keep the puck in front of him through traffic and bust loose for the break away goal. The period ends 4-3 Sand Sharks. The third period saw the Sharks pound the old man in net for the Rays with twenty six shots, but he somehow managed to keep the puck out while at the other end the Rays could only muster seven shots on Gaffney. It would be the eighth shot of the period however, off an Evan Kirk rebound that Joshua Guay would bury with eleven seconds left to tie the game that would send the crowd into a frenzy, and the game into overtime. No scoring in the over time as both teams had their chances, but the netminders said not tonight. Only one player could bury the biscuit in the three man per team shoot out and that man was indeed… Evan Kirk. His fourth goal of the night buries the Sharks winning streak and lifts his team out of the FIHL basement. The Rays were one for four on the powerplay while the Sharks failed to convert on their only chance. An exciting finish for the Rays but the real question is will Evan Kirk be named Captain of this team with the way he has stepped up his game as of late? Or should Coach Guay give him the “C” just so the players have to call him, “Captain Kirk.”?

In Game two of the Saturday night games at the Gas Chamber, it would be the battle for first place, and it would be a battle the Aces would win. In the first period the Minute Men had a plan to protect their new net minder Lucas White and managed to prevent and counter the air strikes the Aces were sending in for about ten minutes. It would all fall apart soon after however as the Aces score three goals in about four minutes to crack it open. Connor Hill would beat White first with a wicked wrister from the right circle unassisted. Alex Macris then pounds home a pass from Hill in the slot, Tate feeding him from the point. Lastly, Tate the goaltender who was skating out in this affair would score his first goal of the season off a pass from the Ferris Wheel of Love. Just like that the Minute Men were down three and Coach Frontiero had to come up with a new plan. The new plan was installed and resulted in a goal within seconds of the Aces third strike. Jonny “Sweet Potato” Motta would take the new found open ice and go coast to coast to butter his toast and get the Minute Men on the board with the much needed response. There was no assist on the play. With two minutes to go, Brody Jamruk would pass the puck to the opposite corner to a waiting Big Dog Soroukas. Joey would make the bank pass off the side of the net right to Andrew Harmon for the one timer which blew past Keegan Lentz of the Aces and just like that, it was a one goal game. The period ended that way, with the Aces leading 3-2. The Second period saw the teams trade goals early as the Aces reopened up the two goal lead on Hills second goal of the night, assists going to Delaney Zerfass and Zachery Tate. That goal was answered quickly when George Brkljacic had a Motta Moment of his own, going coast to coast for the tally. Shortly after that, everyone’s favorite villain would find himself in the sin bin and the Aces would take advantage. Two minutes for kneeing for Frontiero leads to an Alex Macris power play goal, assist again going to Zerfass. Two minutes later The Ferris Wheel of Love adds insult to injury, scoring unassisted to give the Aces a 6-3 lead with ten minutes to go in the game. The game got interesting when Andrew Klingel and Connor Ferris would both be in the box with five minutes to go, however. The Minute Men call a time out and set the plan up. It works to perfection as Wyatt Frontiero scores a goal for each powerplay and with three minutes to go the Militia are within one and frantically reloading the muskets. On the five on three the Men moved the puck around the zone quickly and with purpose. Harmon would feed Motta and with the Aces overloaded on one side, Motta slides the puck to Frontiero who had all day to creep in and snipe the top right corner on Lentz. On the second one, George Brklajcic would feed Frontiero at the top of the zone for another walk in. Frontiero has the top left corner this time but decides to go in through the traffic for a deke. It did not go as planned but wound up in the net regardless and now we are back to frantically reloading muskets with three minutes to go. The Aces bolstered the blue line in those last minutes however and the Men could not get out of their own end. With one minute to go, the Minute Men make the costly turnover and Ferris pounces on it like a kitten on cat nip and buries the puck past the surprised Lucas White. The Game ends that way, after an impressive rally by the Minute Men, 7-5 with the Aces leaving the game sole owners of first place. The Minute Men out shot the Aces 50-40, were two for three on the power play, while the Aces were one for two on their chances.

That is your game recaps, there will be more news out tomorrow with adjustments to the practice schedule for next Sunday and a few other items. Live from Lees House, I am your humble correspondent, Stachs DePaads.