Minute Men One Win Away, Sand Sharks One Loss Away… 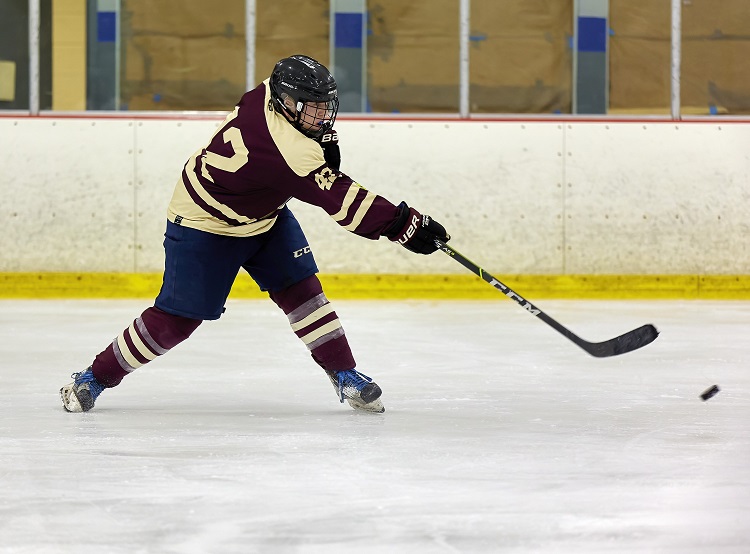 Playoff seeding may have gotten a little clearer with this week’s FIHL games possibly providing a first-round playoff preview!

Game one had the first place Minute Men going up against the fourth place Sand Sharks. A win for the Men would tighten their grip on first place, and a win is just what they got. George Brkljacic, the Minute Men’s most valuable player last season would register a hat trick and one assist for the Militia, including the game winner. The Sand Sharks struck first in this one when Gunnar McClellan(s) jammed home a Jonathan Pohnel(s) rebound less than three minutes into the contest. It would take the Minute Men all the way to the 3:06 mark to answer as the Sand Sharks dominated puck and ice, out shooting the Minute Men 17 -11 in the opening stanza. Wyatt Frontiero takes a Julien Wojcik poke pass from his own zone all the way down-town to purchase the first goal against of the night for Sharks. Mario Romero also notched an assist on the play. The period ended 1-1. In the second period the Men came alive and out-shot the Sharks 21-5, outscoring them by the same ratio as a result, 4-1. The math class is free. You are welcome. The first of the four unanswered goals for the Men in this period came on the power play five minutes in as Wyatt Frontiero found George Brkljacic sitting on the back porch sipping tea for the easy score. Unsweet if you were wondering. Georgie is a bitter man. Five Minutes later, Sweet Potato Motta walks into the Sharks zone and slams the screen door, he needed no help. Exactly one minute later Julien Wojcik somehow sneaks a loose puck past the Sharks netminder on the doorstep off a Mario Romero rebound and lastly, Georgie boy gets goal number two on the night with some help from Motta and Alexander Noti. The Sharks managed to score a late period goal on a nice pass out of the corner from Jayveer Doad to Jonathan Pohnel(s) who nailed the one timer past the returning John Thompson for the Sharks second goal of the game. Period ended 5-2. Georgie Boy completes his hat trick five minutes into the third period from Kyle Fanelli, but the Sharks respond quickly to maintain the three-goal deficit. Peyton “Don’t Fling Me Bro” Brisley chunks in a Gunnar McClellan(s) rebound for the score, Jonathan Cholnik with an assist as well. Five minutes later, Jonny “Motta of all Shots” unleashes the bomb from the high slot after a nice feed from Brkljacic for the seventh and final Minute Men goal. Scotty “The Body” Mezack set the whole play into motion with a behind the net pass to Georgie. The Sharks get one last goal when Lex “Luther” Petrov takes advantage of a sleeping Minute Men defense and stuffs a loose puck into a practically empty net and the final score is 7-4 Minute Men. Both teams went one for two on the power-play, but the Minute Men out shot the Sharks 36-13 in the final two periods for a total of 47 to 30 in the game. The win for the Men, coupled with the Aces loss to the Sting Rays means that if they beat the Sting Rays next week in the FIHL’s Saturday Night Main Event, they will indeed clinch first place. That combined with another Sand Shark loss would mean the Sharks and Minute Men would square off in the first round of the FIHL Cup Playoffs.

In game two, as mentioned, the Aces were defeated by the Sting Rays. Not even the addition of Connor “The Mountain” Hill could help the Aces as the line-up was depleted for the Aces. The Macris brothers along with Leah Klingel and Gus Kmoarek are losses that change the dynamic for the once high-flying Aces who have now lost five games in a row. The Sting Rays snapped their losing streak with the help of Myles “Break Away” Bulmer(s) and his four goals as well as the first ever hat trick in the FIHL for Andrew Burnside. Bulmer scores on a Lingo rebound seventeen seconds into the game and the Rays never even came close to relinquishing the lead there-after. Less then a minute later Burnside gets his first on a Bulmer rebound, Lingo tied to that goal as well and it is 2-0 just like that. Lost with out his cohorts in the Macris Brothers, The Ferris Wheel of Lonliness cuts the lead in half on a nice snipe from the slot after touring the O Zone and just like that it is 2-1. Maybe this will be a game? Six unanswered goals by the Rays said… ah, no. Bulmer with his second on a break away fed to him by Tristan Barnard along with a nice one timer by Logan Brann in the slot fed to him by Kirk in the corner, closes the period scoring for a score of 4-1 Rays. In the Second period only the Sting Rays would score as the Bulmer and Burnside traveling side show would continue. Burnside completes his hat trick while Bulmer slips a goal between Burnsides tallies to complete his own hat trick. Bulmer would be the primary assister on both Burnside goals while Alex Talbot would set up the Bulmer goal. Joshua Guay also checked in on Burnsides first of the two. The period ended with a score of 7-1 Rays. The teams traded goals twice each in the third period with the Rays scoring first. Bulmers fourth goal at the 18:53 mark assisted by Lingo was insult to injury but if there was bright spot for the Aces and the FIHL in general, it was the Aces next goal. Claudia Amis takes a puck that deflected off of one of Ferris’ wheels and whacks the puck past the league’s hottest goaltender in Jason Cribbs from the high slot for her first goal in the FIHL. Claudia has been the leagues most dedicated sub and has worked hard to be better at the game we all love and her first goal was a nice reward! Ferris would follow that up four minutes later with a wicked water bottle snipe to make it 8-3, and the Rays close the scoring out with Evan the Kirk’s unassisted goal with three minutes left. The Final on this one is 9-3. The Rays out shot the Aces 70-37 and neither team scored on the power play. If the Aces win next Saturday vs the Sharks, that loss for the fish will lock up fourth place for the team who walked away with first place in the inaugural season, as they marched towards that current role as defending champions. The win for the Aces combined with a Minute Man loss would still give the Aces a chance at a first place finish.

So next weekend’s double header will solidify the final seeding, but it is more possible we just saw a preview than not of the first-round match ups. We will see you next week!