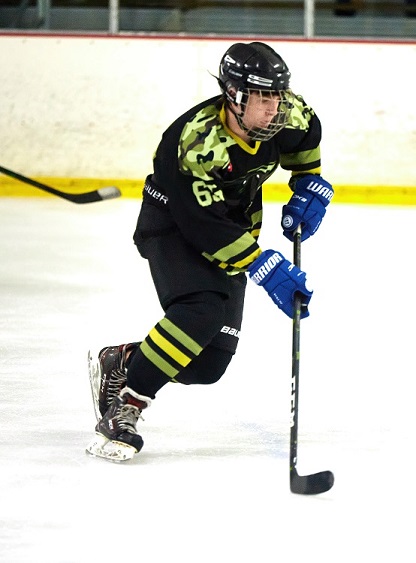 With just two games left in the regular season, the standings are super tight and final seeding will not be determined until the final horn of the FIHL inaugural season.

In the first contest of week 23, The Minute Men had an opportunity to steal a win from top seeded Sharks due to a shorthanded bench. It did not look like that was going to happen though as the Sharks came out with all eight players determined to make it a go and scoring three unanswered goals for a 3-0 lead at the end of one period. Beaudy Beaudin would score his first of two on the night and Karson Chotovinsky would score two of his four goals on the night. Beaudin with his four point night is creeping up the standings and is only seven points behind the league leader with two games to go. In the Second period the Minute Men would wake up and punch in four goals compared to Beaudins one for the Sharks and make it a 4-4 tie at the end of two. Alex Noti, the Men’s top forward, would score the first of two on the night on a nice back and forth passing play with Frontiero. Frontiero would grab the second goal for the Men on a coast to coast butter and toast the goalie play. Dom Guardino was on the same side as Frontiero just the night before as the Goose Pond team shut down Mitchell High 6-1, but tonight, the two long time friends were on opposite sides and no mercy was shown. Add two goals but Captain Mondo, one on the power play and we were all tied up. In the third the Sharks just simply ran out of gas as they were out scored 5-3 and out shot 17-10. Five different scorers in the third as Harmon, Fanelli, The sinister Side Show Bob, Connor Hill, and Alex Noti all scored. Karson Chotovinsky would score both goals for the Sand Sharks in the final stanza but the legs were just not there and the Minute Men would coast out to a 9-6 win. For the Minute Men, it was the third time this season they have won two in a row, and they will attempt to win three in a row next week in a game that could have major implications on the playoffs, the Sting Rays. The Sharks will simply work on their game for the last two weeks as they have the top spot all locked up. They can however play a major role in seeds 2-4.

In the second game, we had a back and forth affair that would see the Sting Rays playing catch up all night long. The Aces drew first blood on a Gus Komarek goal very early in the contest. The Rays answered minutes later on the power play to tie it up with a Tyler McDuffie goal. The Aces potted a go ahead goal to restore the one goal lead late in the first off the stick of FIHL league leader Josiah Martinez. The first ended with a 2-1 lead for the Aces. In the second stanza the Aces jumped out to a 3-1 lead on a Nate Salazar goal, but once again, the Rays answered within a minute with a Natter tally. The Aces restored the two goal lead and added another goal to open it up to a 5-2 lead. Goals from Law and Komarek had the Aces looking like they were in control with 9:07 to go in the second. But this is the Sting Rays, and they never seem to go away. Three goals in less then two minutes to close out the second left this game all tied at 5 to start the third period. Goals from Poweska, Natter, and LaFlamme brought the house down and lifted the Rays to new life. The Aces regained a lead mid way thru the third period on a nice snap shot by the Mad Fox, the same shot he had been working on all week at the Pond. The Rays pushed on and with 4:08 left in the third it paid off as Tyler McDuffie would score his second of the night. No more goals were scored and we wound up with just our second over time game in FIHL history. It would be longer then the first OT game but was still short. Back in week 2 the Sharks defeated the Minute Men ten seconds in, in this game the Rays prevailed in just over one minute into the session. Erik LaFlamme would come in down the right side on a break in. Otto played hard on the pass and as he was sliding across, Aces Captain Josiah Martinez dropped to block a potential pass but the puck went off of him and into the empty net as Otto was sliding right. No one knows if LaFlamme was passing or shooting and he won’t say nothing except… IN. A heart breaker for the Aces and a big step to securing a higher seed for the Rays.

That was all she wrote for Saturdays games with the exception that Adrian Klingel won the Winners Choice Raffle. We do it again next week so DO NOT throw away those tickets and buy more! Two weeks left and then Play Offs! Thursday we will be releasing the playoff schedule along with other news and notes! Stay tuned!