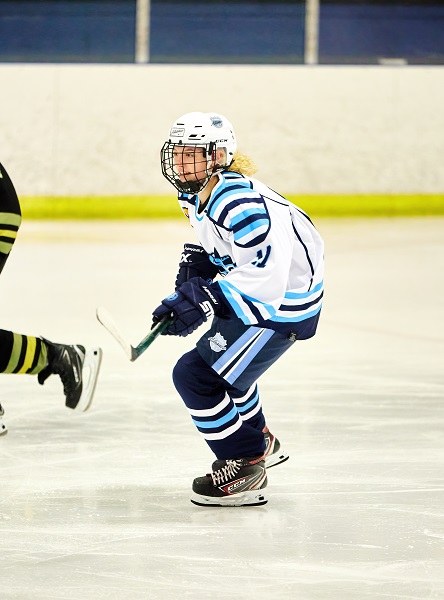 The FIHL rolls on with two Sunday Games that sees the Minute Men and Aces surging, Sharks and Rays struggle.

Our first game had the Sand Sharks visiting the Minute Men and it was testy for much of the first before George Brkljacic decided to put on a show. He would score a natural hat trick in the last 5:25 of the opening stanza. The first came off of a nice break out that saw him end to end. the second came on the power play when Ryan Compton shoveled the biscuit in his path and again, end to end for the goal. The third was a wild Wyatt Frontiero tour of the ozone that ended with him spotting George on the Sharks back door writing a book. In the second period Frontiero would head to the bench for a change but changed his mind last second as an attack was pending. he broke up the attack and went coast to coast for the tally. A beautiful setup in the slot by Brkljacic for Andrew Harmon minutes later and it is 5-0 Minute Men. Joey Soroukas also with the assist. The Sharks began to battle back though just ten seconds later and would score three of their own in the second period. Matthew Wallace (s) would snipe John Thompson twice in a row in his FIHL debut. The 2008 born Phenom could be a boost to the Sharks or Rays if he ends up playing full time. Time will tell. The Militia hit back with another two goals by Brkljacic which would include the eventual game winner. Jonathan Cholnik would score the next goal on a power play with George in the box for the Sharks to close the gap up to 7-3 and that is where the period would end. The Sharks refused to go away quietly in the third and scored two unanswered goals to get within two. Julien Mesa gets the first and Finn Smith would score the second on a nice hockey play with assists going to Clark and newest Sand Shark, Lex Petrov. The Sharks then pulled Gaffney for the extra attacker while on a power play to try to get to within one, but their hopes and dreams were crushed by everyone’s favorite player to hate, Wyatt Frontiero, as he slapped the puck from his own blue line into the empty net. The Sharks just kept going and would actually score on a Phenex Hauver one timer in the crease from Julien Mesa to get their sixth goal of the game with :07 left. The game ends 8-6 Minute Men. The Minute Men finished with 51 shots and one for three on the power play while the Sand Sharks put 47 shots on Thompson and were one for five on the power play.

In game Two, the Aces were dominated in the first period but much like the Minute Men in first game of the night, scored three goals after the 5:39 mark of the opening stanza. The Macris Express would end up accounting for seven of the Aces ten goals tonight, lifting the Aces to their fifth straight win. The Aces opened their scoring when Macris the older sent the Broccoli Chopper CJF, off to the races for the coast to coast and snipe. The second goal was scored by another prolific line the Aces have developed in Zach Tate, Emily Scott, and Gus Komarek. Scott set up Tate for his first of three on the night for the second Aces goal. Macris the younger would score the third goal, set up by his brother Alex and the first period ends 3-0, Aces. In the Second Period, the Aces strike first with another goal from the Tate line and Zachs second of the night. The Sting Rays would answer that one in under two minutes with a short-handed snipe from none other than Chandler Cha Ching O’Dell. Assists went to Josh Guay and Matthew Kramer. Two more late goals by the Ferris Wheel of Love and Alex Macris and the second period ended 6-1. The third period started off hot with both teams scoring in the opening minute. The Tate line does it again to complete his hat trick on the night and don’t look now but Zachery Tate is sneaking up the scoring charts, now fifth in the FIHL with 9-9-18 totals. The Rays answered in seven seconds when O’Dell screamed in off the face off at center ice and sniped a sleeping Phillip Tate, brother to the aforementioned Zachery Tate. The Sting Rays are never out of a game with Chandler O’Dell in the line-up and while he would get one more for a hat trick of his own, he would also get three penalties in the third, making room for the Aces “Macriscure” to continue. Three unassisted goals–two by Alex and one by Michael and the Aces extended the Sting Rays losing streak to six, while extending their winning streak to five. The Aces pounded Jason Cribbs with 68 shots while Phillip Tate who now leads the FIHL in save percentage at .920 with five games played, faced 55 shots. The Aces were zero for seven on the power play while the Sting Rays were one for three and had a short-handed goal as well. The Sting Rays have the best Power Play and Penalty Kill in the FIHL by a long shot, but five on five is where they suffer.

That is all from FIHL Land. We will see you next week for the battle of the streaks. Sharks and Rays both looking to snap losing streaks while the Minute Men and Aces will be looking to extend their winning streaks. See you all Saturday night at 645PM for game one puck drop!