Mondo to the Military!! 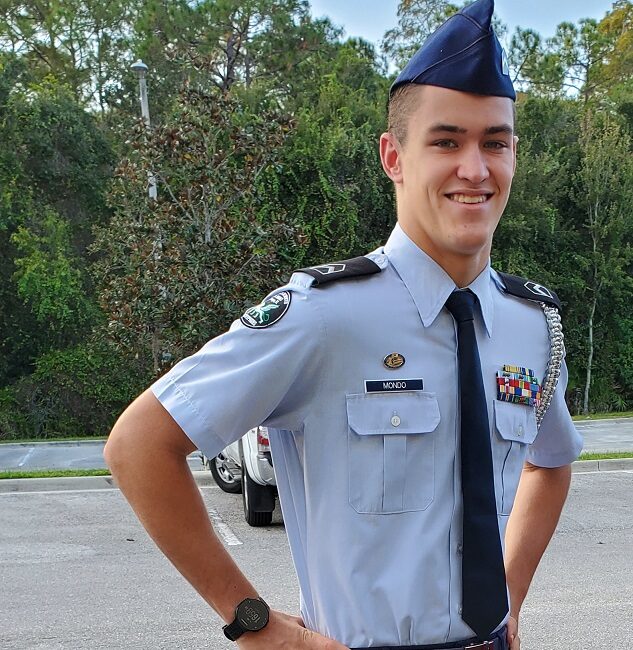 The FIHL is proud to announce that Minute Men Captain Maxwell “Max” Mondo signs with the Naval Academy!

Max Mondo is a towering figure in the FIHL—not just for his six-foot-three inch frame, but for all his accomplishments in and out of hockey.  An example to all on just how much you can do with a great work ethic, a good attitude, and of course some help and guidance from Dad and Mom.

Max is a Goose Pond guy, having come to the Pond in 2017 as a lanky fourteen-year-old that wanted to get better at hockey.  He quickly became a Goose Pond fixture because if the door was open, he was there.  He was referred to as “the bender” but the name didn’t stick as he rapidly developed into a force in TBSA Rec League.  Max wanted more, so he set his sights on being ready for U16 A travel.  He not only made that goal but became the leading scorer for Coach Chris on the Kissimmee Stars in his senior U16 season—his only U16 season. While playing for Steinbrenner High School in 2019, chants would rise from the stands of “We Want MONDO!!” The chants fell on the deaf ears and so Max decided to play the Spring Season in 2020 with Coach Chris again and the Goose Pond team.  Following those games Max decided to jump in to the FIHL.  He was drafted 8th overall and was the Minute Men’s second pick.  He was an easy pick for Captain and has delivered this season for the Men with 13G-13A-26PTS-20PIM totals from the back end, as he is paired up with long-time friend Wyatt Frontiero on defense. His aim is to lead the Militia to the first ever FIHL Cup Championship. When he turned eighteen, he jumped at the chance to play with Coach Chris and joined the 8 Balls men’s league team at TBSA and scored a hat trick in his first game. While his signing with the Naval Academy is not for hockey, Max will also be looking to play on the Academy’s D3 Team for Navy.

Maxwells on ice accomplishments have only been surpassed by his off-ice achievements.  Max is a standout at Walter L. Sickles High currently with a weighted GPA well over 4.0.  He is the President of the National Honor Society, a National Merit Scholarship Finalist and has taken all his courses in preparation for a degree in Aeronautical Engineering.

He is the current Group Commander as well as Cadet of the Year for the Sickles JROTC Unit 20083.  He picked up 2021 top ten cadet for Hillsborough County, 2021 Air Force Association Award, and the 2020 Order of the Daedalions Award. He has been inducted into the Kitty Hawk Air Society, awarded R/C Aircraft Solo Wings, is on the Drill and Sabre team both armed and unarmed and is a Flight Simulator Specialist.

Max is also training to be a licensed pilot and has been flying all kinds of aircraft since he was 9 years old! He is currently a student pilot training at Atlas Aviation, Tampa, FL and was awarded a Certificate of Achievement by Florida Department of Transportation for successfully landing at all 126 public-use airports in the state of Florida—an accomplishment that only Max has done in the history of Florida flight. His flights include 25.4 hours logged flight time in AT-6, amphibious Maule M7, Cessna 172 Seaplane, Cessna 162, and Robinson R-22 helicopter and has soloed a Cessna model 162 on 9/8/2018. It is no wonder he is going to the Naval Academy!  Max has said that his dream is to take off and land from an air craft carrier. I think it will happen, don’t you?

Max also has his own company. He founded and operates as sole proprietor, Maxwell’s Cleaning Services (MCS).  MCS specializes in pressure washing of exterior surfaces as well as vehicle washing/waxing. He has guided this small company to 75% post-tax profit margins, enough to pay cash for his own Tacoma pick-up truck.

He has been in numerous community projects such as Park/Beach Cleanups, Retirement Home volunteering, Feeding Tampa Bay, Wreaths Across America and Relay for Life.  Max was a guest on the Goose Pond, Pond Cast and you can see that here at this link (1031) Goose Pond University Podcast s1e6 – YouTube . One of our most viewed shows.

Maxwell Mondo is a tribute to the things that are good in this world. He has been a good friend, a good student, and a leader.  The FIHL is proud of him and will miss him very much in season two. The Pond will not be the same as well.  We all wish him the best of things to come as he strides with confidence into his adult life.  MAX MONDO, WE SALUTE YOU!!