Opening Night is in the Books!!

FIHL > News > Top stories > Opening Night is in the Books!! 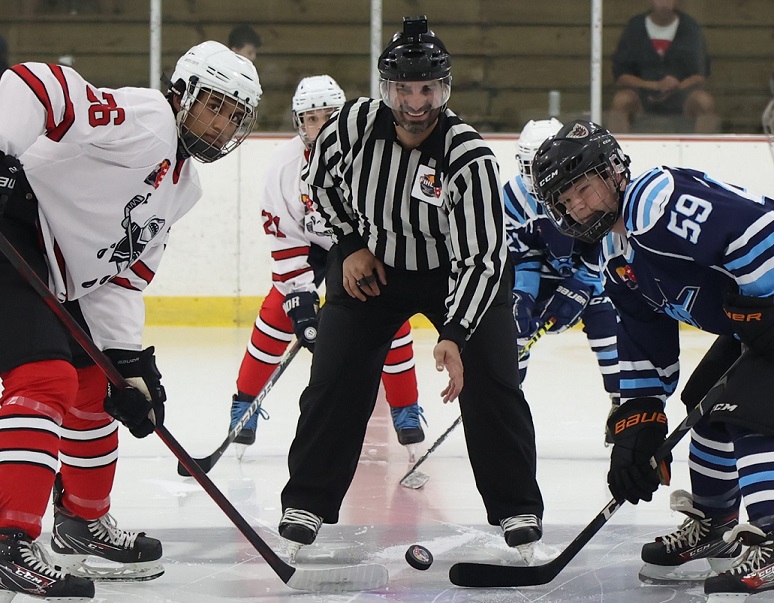 The Sand Sharks drop their opener to the Aces to start their defense and the Sting Rays sharp shoot the Minute Men!

The opening night games are over and the Aces and Sting Rays were victorious! The FIHL raffled off some nice Tampa Bay Lightning Back to Back Cup art and the New FIHL Swag for all four teams was available! It was a busy but fun night so lets get to the game recaps!

In game one, the defending Champion Sand Sharks opened up with a rematch of the finals vs the Aces. FIHL Official David Benmocha dropped the opening puck both in real time, and for the ceremonial drop. The FIHL appreciates all he has done to keep our games going and his efforts to create better officiating that focuses on the players! It took nearly the whole first period before the first goal of season two was scored and it belonged to JoJo Nemcova of the Aces as she tapped in a loose puck with assists from Jonathan DelaCruz and Zack Tate, all three are newcomers to the Aces and the FIHL! The goal came with six minutes left in the first and was followed just a minute later on a break away goal by Gus “The Bus” Komarek for a two nothing game. Gus also did his obligatory duty and made sure to have the first penalty of the season, as was right, since he led the league in penalties last season. It would be a Sand Shark penalty however in the final minute of the stanza that would lead to the first power play goal of the season with twenty two seconds left to play. Connor Hill would catch a Jo Jo feed and beat the Sharks tender with a nice wrister for the 3-0 end of first period lead. In the second period the Aces would add two more tallies. Zach Tate would score his first as an Ace with once again, JoJo Nemcova on the assist. Returning Finalist MVP Nate Salazar scored at the halfway point to the period to make it 5-0. It would stay that way until three minutes remained in regulation with Finn Smith spoiling the shut out bid of Phillip Tate. There has never been a shut out in FIHL History. Smith took a Gabe DelaRosa feed and after shaking off an attacker, wristed the puck past Sean Gaffney who was in the pipes for the Sharks. One minute and forty five seconds later, Javeer Doad made it 5-2 unassisted and that is how it would stay! Shots on goal for the Aces were forty eight while the Sand Sharks had thirty eight. Only three penalties were called per side on this one and only the Aces cashed in on one.

In Game two, the Minute Men and the Sting Rays were in full on opening night mode which made for a very entertaining game. Both teams have a good crop of new players as well as many returning players and the benches were full. The Sting Rays took the advantage early in the first period when new comer Logan Brann took a beautiful cross ice pass from another new comer, Noah Gawel and buried it into the empty side. About four minutes later the Rays scored again off the slick stick of returning player and last seasons leading goal scorer Chandler “Cha Ching” O’Dell. Matthew Kramer who literally signed his contract hours before the game would get the assist. With 1:52 left in the first period Gawel would snipe the Minute Men’s John Thompson on a breakaway from a turnover on the Sting Rays blue line for his first goal. That tally made it 3-0 and when the Minute Men were called for tripping just seconds after that goal, the Sting Rays were looking for a fourth. The opposite would happen however as everyone’s favorite villain, Wyatt Frontiero would shove aside O’dell in pursuit of the puck, block a shot and go the distance for the break away shorty for his first of the season, first of the night, and first for the Minute Men with just :04 left on the clock. The period ended 3-1, Sting Rays. The Minute Men opened scoring in the second stanza to close the gap to one. Newcomer Brendan Burgess snapped home a Side Show Robert feed in the slot for his first goal in the league. The Rays answered back four minutes later with a second Logan Brann goal set up by Chandler O’Dell. The Minute Men had an answer to that mere seconds later to reclose the gap right back to one on a four on four. Wyatt Frontiero would go coast to coast and snipe Jason Cribbs over his right shoulder short side for the sick goal, making it four to three. The Rays wouldn’t stand for it and sent out Aidan Lingo two shifts later and he would score his first goal in the league on a nice pass from fellow newcomer Alex Talbot. Chandler O’Dell would add his second goal of the night un assisted with four minutes left, and the period would end 6-3, Rays advantage. In the third things tightened up as the teams played hard nosed hockey waiting to see who would blink first. It would be the Minute Men when Noah Gawel would get his second of the night off a send away pass from Andrew Burnside. Seconds later when a slightly blocked Kyle “The Grand” Fanelli shot was hammered home by Joey “The Big Dog” Soroukas into the empty side, the Minute Men closed the gap to three making it 7-4. A power play goal with three minutes left from newcomer Jonny “Whatsa” Motta, and the Minute Men were looking to get quick strikes to force the first over time of the season right out of the box. They dominated much of the final three minutes but the return of Ty Schmidt who entered the game mid stream would prove to be the problem as he only let in two goals on thirty four shots and the game ends 7-5 for a Sting Rays win. The Minute Men out shot the Rays 60-32 with a power play goal and a short handed tally but still come up short in the opener. The Game had thirteen penalties and while the Rays scored seven, they were 0 for 6 on the power play.

So there you have it!! No games this weekend due to Columbus Day Tournaments but practices are on, check the schedule for those, they are always open to the fans. A fun night of hockey and yes ladies and gentlemen… the FIHL IS BACK!!