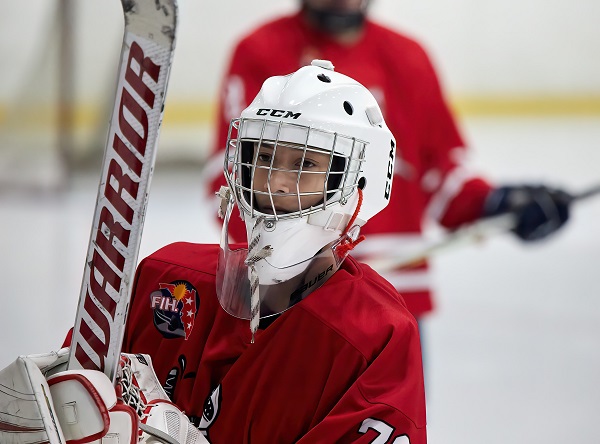 Two impressive games were played this weekend in FIHL land but for two different reasons. One for the warrior style of play by two depleted teams and one for the surge that is being shown by the long time residents of the FIHL basement.

In Game one we saw a still depleted Sand Sharks roster go toe to toe with a similarly depleted Aces roster. It was an epic battle that saw the Sharks bolstered up on the back end by the stellar play of Sharks net minder Dom Guardino (pictured) as he stopped 43 of 47 shots. Up front it was Cameron Smalley who led the charge scoring four out of the five Sharks goals. For the Aces, Nate Salazar would net the first and last goal for the Aces while Frosty The Goal Man and Gus “the box” Komarek would score the other two. Salazar would score early in the first to draw the first blood but Smalley would strike back 91 seconds later to tie and the stanza ended as such, 1-1.

In the second period, Smalley strikes early again but the Aces answer with Komareks goal five minutes later to tie the game at two. The Sharks would use only 90 seconds to respond yet again with a goal from Patrick Dary, assisted by Smalley and Smith to regain the lead and end the second period with a 3-2 lead.

In the first half of the third period the Aces score two goals to reclaim the lead on Frosty’s goal and Salazars beautiful one timer set up by Savannah Scianna, and it was looking good for the Aces. The Sharks came back at the nine minute mark to tie the game at four goals each on Smalleys third goal of the game. It was a battle from there as the net minders stopped 27 shots between themselves but it would be the last shot in the last second of the game that would be the difference. Nathan Souza, from the bottom of his own circle, makes a back hand sauce all the way to Smalley at center ice with three ticks left on the tock and Smalley walks in on Jacob Otto all alone. He snaps the wicked wrister and Otto makes the old school stand up save, sealing off the five-hole with the stick. The pucks comes right back to Smalley however and his quick reaction catches Otto this time, and the puck crosses the line just before the buzzer blows giving the Sharks the win, 5-4, and the Aces a gut wrenching loss. The Sharks dropped to seven skaters during the game after Gabe DelRosa took a nasty spill on the wall and the Aces were without their Top Ace in Josiah Martinez, not to mention Jaxon Law and three other players.

In the Second tilt, The Minute Men made a little history for themselves, winning three in a row for the first time in Franchise history and are playing .500 hockey over the last ten games. Both teams had a full bench but it should be noted that Rays lead scorer Chandler “cha ching” Odell and Kane Eanes have been missing in action for the last three games. The Minute Men were without their Captain, Max Mondo although on the bench, nursing a sore knee. In the first period it would only take one shot for the Rays to get on the board as Maddison Natter was down low in the zone on a pinch play and set up Tyler Cook in the slot for the one timer. The play came at the end of a dominant opening shift by the Men and left many wondering if it was going to be one of those nights. They pressed on however and both teams battled into the period hard and the 1-0 lead held up until about ten minutes later. Scott Mezack would head to the sin bin for hooking and with the Rays on a power play looking to add to the lead, Wyatt Frontiero would storm down the ice shorthanded to bury the biscuit and the Rays lead as well, tying the game at 1-1. The period would end in the deadlock.

In the second period, Frontiero would make another rush into the zone, only to be broken up. The puck however lands on the scalpel of Side Show Bob who slices it top shelf and the Men are up 2-1. Two minutes later, Alex Myers would get fed at the point on some nice puck movement in the Militia zone by the Rays. His step in laser beam wrist shot goes in off the blocker of Thompson and in and we are all tied up at two. From there it was a wild fourteen minutes in the second period as the Minute Men score four unanswered goals and never look back. Frontiero takes a Andrew Harmon regroup effort and storms down the ice again and scores a goal that left both head coaches eating their now famous hats. That was followed up by Georgie Brkljacic catching a Joey Soroukas break out tip and then tapping in his on rebound on the rush to the net. This was followed up by Vlad “The Dad” Handjiev finally getting the elusive back door goal and then not to be without controversy, Side Show Bob gets a back bar down goal. Video evidence on the spot by Sting Rays defensemen mom Suzanne Natter, left officials scratching their heads as it did look as though the puck hit cross bar and down and did not cross the goal line.

It would not make a difference however as the Minute Men and Sand Sharks would play a scoreless third period and the game would end, 6-2. It should be noted that the scoreless period of play has only happened twice before this entire season–both games involved the Minute Men with the other two teams in the league. The win catapulted the Minute Men from the basement to the second seed as they have the lowest goal differential of the three teams now all tied with nine wins each.

Stay tuned and be on the lookout for the final regular season games preview edition coming to you Wednesday. Seeds 2 through 4 are anything but settled. The winning ticket this week belonged to Dom Guardino! Congrats to Dom on the win… and the win!