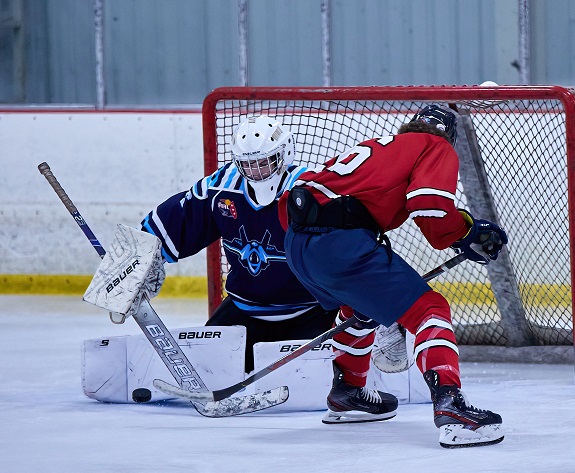 Games two and three of the FIHL Finals are in the books and the Aces now have their backs against the wall after winning game one.

Game two was an opportunity for the Aces to lay a choke hold on the Sharks with a win but with two returning players for the Sharks defensive lineup, it would prove to be a difficult task. The game in fact was nearly a mirror image of game one where the Aces had scored four to open the game, this time it was the Sharks with the first period blow out. Five different scorers rippled the twine for the Sharks in that stanza. Smalley, Beaudin, and Souza for the usual suspects, along with Smith and Maybury to dwarf the Josiah Martinez sole tally for the Aces. A much tighter second period would end in a 3-2 advantage for the Sharks. Smalley and Beaudin again along with Gillum for the Sharks and Salazar and Komarek for the Aces. After the first period rout, an 8-3 score at the end of two would prove to be a daunting hill to climb for the Aces. Another tight third period where each team would net two goals and the Aces fate was sealed for game two. Jaxon law would score both goals for the Aces before either Shark strike, and it looked like at 8-5, we may get a comeback. There was still thirteen minutes left in the game after the second Law goal, but the Sharks defense came up big as well as Dom Guardino who stopped eighteen Aces shots in the third period. At the 3:28 mark of the third, Chris Maybury made it 9-5, the score of the Aces win in game one, and Cameron Smalley added an empty netter with five seconds left for the 10-5 final. Like game one, neither team could score on the power play as the Aces went 0 for 3 and the Sharks went 0 for 2. Shots were high for both netminders at 61 for the Aces and 54 for the Sharks.

The pivotal game three was held Sunday as a matinee affair and the Aces made adjustments to the roster while the Sharks stayed pat. The changes paid off as the game was tightly checked but with more penalties than in games one and two combined. The result was three power play goals and one shorthanded goal and a much closer affair. The Sharks nailed two early strikes and it looked like we might be on our way to a repeat of game two. The defensive duo of Ryan Tanner and Chris Maybury would get the goals for the Sharks but it would remain 2-0 Sharks until the final seconds of the period when Nathan Salazar would score a power play goal while his nemesis Cameron Smalley was in the sin bin for his second high sticking penalty of the game. End of one, 2-1 Sharks. Seven goals were scored in the second period as the teams began to open things up on the score board yet again. First up was Smalley with the goal to open up a 3-1 lead for the Sharks. The Aces answered right back however with a goal from Jaxon Law on a wicked snipe over the short side shoulder of Dom Guardino. Four minutes later as Ryan “The Lady Killer” Tanner was in the box for for roughing, Nate Salazar would tie the game with his second power play goal of the night. Less then two minutes later the Sharks answered as Nathan Souza took the Smalley drop pass and picked his spot on Jacob Otto and the Sharks are back up by a goal, 4-3. The Aces reloaded the Law and Salazar traveling road show and tied it up again at four when Law grabs his second goal of the game and with three goals on eight shots, the Sharks made a change in the pipes. The battle would continue over ice space and the break through came at 8:24 of the second when Owen Cullen gets a power play goal on a questionable kneeing call on the hottest Ace, Jaxon Law. The Sharks would add another goal when Beaudy Beaudin would score his first of two on the night and the second period would end with the Sharks up 6-4. Another early goal in the third by Beaudin and the Aces were right back to a three goal deficit once again like game two and the Sharks would not relent. Chris Maybury puts the nail in the coffin to make it 8-4 before Gavin Frost scores just his second goal of the series, shorthanded and the final score is 8-5, Sharks.

Shots on goal on the game were 44 for the Sharks and 40 for the Aces. The Sharks were 1 for 6 on the power play while the Aces were 2 for seven with a shorthanded goal to boot. This Saturday at 6pm, the Sharks can close it out with their third straight win or the Aces could force a game five with a victory at home. Tickets are sold out for this game but if you want to be there to witness possible history, just let me know… cuz I know a guy. 😉