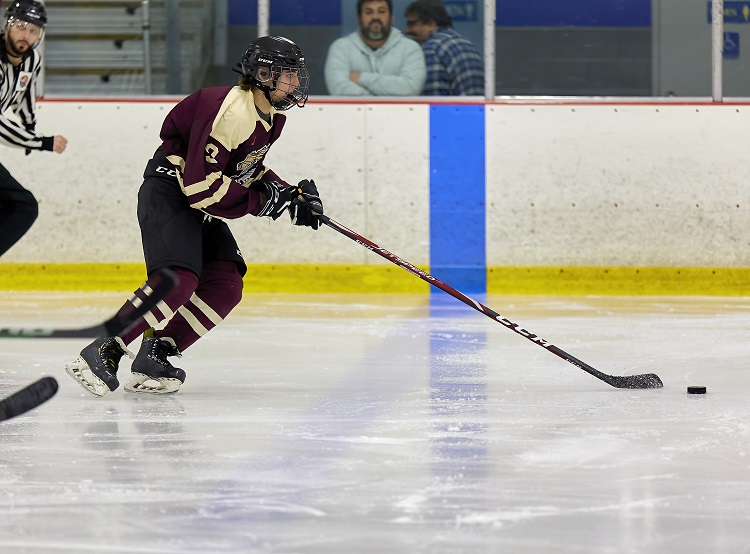 With six games to go, the four teams of the FIHL are beginning to hit their stride as the bottom two teams take out the top two teams in an effort to muddy the water heading to the playoffs.

Two games this weekend, games thirty seven and thirty eight. Our first contest had the Aces taking on the Sharks and it looked to be a tight affair as it took fifteen minutes for one of the teams to draw first blood. That would be the Sand Sharks as returning Champion Beaudy Beaudin would score unassisted on a pickoff in the Aces zone.  Beaudy had been playing this season in Massachusetts in the Typhoon Organization and will be a sub for the Sharks due to the fact that the Sharks roster is officially full. The Aces would get an equalizer at the 1:44 mark when returning Ace Jax Law would make a guest appearance on the sub list, and a nice move to score a shot on net, that Zachery Tate would slam home on the rebound. Gus Komarek who has also been out for a while started the play in the Aces zone for the secondary helper. It looked like the period would end that way, but a power play for the Sharks with a minute to go leads to Matt Clark tally on a back door play set up by Wallace and Beaudy and the Sharks take a 2-1 lead into the second period. The Aces tie the game on a sweet rush up ice by Connor Johnston Ferris about halfway through the stanza only to have the Sharks score three unanswered goals in the ensuing eight minutes of play. Jonathan Cholnik bangs home a one two play from Beaudin and Cross, and then Matthew Wallace would score two as Finn Smith would be the plate setter for both of those tallies.  The score at the end of two is 5-3 Sharks, and it would be all they would need.  The Aces grabbed a goal to get within two near the midway mark on a Michael Macris tally that saw him catch a tape to tape pass from Ferris, goal line to blue line.  The Sharks responded within seconds to reopen the three goal lead when Beaudy Beaudin scores a statement goal in which he shreds the Aces D like a cheese grater for the score, saluting the Aces bench during the celly.  Two more goals by the Sharks puts this one to bed, Clark with a one hander around Tate for the highlight reel and Wallace with his third on the night, both unassisted. The Aces score a goal with 2:35 left, another Michael Macris goal set up nicely by Tate, but it means nothing as the Sharks trounce the Aces with a final score of 8-4. The Sharks out shot the Aces 58 to 42 and went one for six on the power play. The Aces were zero for one.

In Game two the Minute Men were without their entire top line, but had the return of John Thompson in net and were looking to gain ground on first place with the Aces loss. It was looking good as they began scoring just thirty nine seconds in when Andrew Harmon ripped a wicked wrister unassisted that hit back bar hard for the games first goal. The Rays tie the game up when Logan Brann completes a nice tic tac toe play that went from O’Dell behind the net, to Poweska on the right side to Brann for the back door entry on the power play.  Seconds later however, the man that was in the sin bin for that goal, Jonny “Sweet Potato” Motta would make good on it as he would unleash a laser as he crossed the blue line, beating Ty Schmidt top left for the goal, and the one goal lead is restored. Four minutes later, everyone’s favorite Villain, Wyatt Frontiero would walk right through all things Sting Ray for his first of two on the night and it is 3-1. Motta, not to be out done by his partner in crime, decided he would do the same, and it is 4-1.  The Rays get one back off the returning Matthew Babcock’s stick, Wivholm and Guay with the assist to make it 4-2.  With just thirty four seconds left on the clock Frontiero matches Motta with another slicing and dicing of the Rays defense for his second filthy goal ending the period 5-2 in favor of the Minute Men, and Ty Schmidts night in the pipes. In the Second period, the Sting Rays come out strong, getting two unanswered goals from the man with the magic stick, Chandler “Cha Ching” O’Dell.  Brann and Kramer would send him off for the first and Josh Guay for the second, and it is now a 5-4 game.  Motta U completes his degree in Hat Tricks to give the Militia a two goal lead once again, but the Rays score two in the final two minutes of the period to tie it.  Matthew Babcock makes a steal for an unassisted goal and Joey Poweska takes a Logan Brann pass with six seconds left in the stanza for the tie and we have a one period game coming up in the third.  The period was intense and there was no scoring until the final minute of play.  What was the Motta and Frontiero traveling snipe show in the first period was now the Jason Cribbs show as the two Big Bad D men for the Militia were stymied by the always smiling net detective.  Motta and Frontiero made every effort to crack the Cribb but would not be able to and with 1:24 left in the game, the Rays hit paydirt on the power play.  O’Dell scores on a scalpel of a shot, set up by Babcock and Guay to complete his hatty for the power play tally. On the ensuing face off, Savannah Scianna feeds Babcock with the back hand, and he carries it into the zone and completes a hatty of his own, for the death blow.  Two last minute goals and the Sting Rays take this one by a score of 8-6.  The Sting Rays were out shot 43 to 39, but were 2 for 3 on the power play while the Minute Men failed to convert on their two chances, both of which came in the third period.

That is all for now, the FIHL Standings are tightening and right now, with one game left before the trade deadline, who ends up where is anyone’s guess!  This is why they call it the stretch run folks!