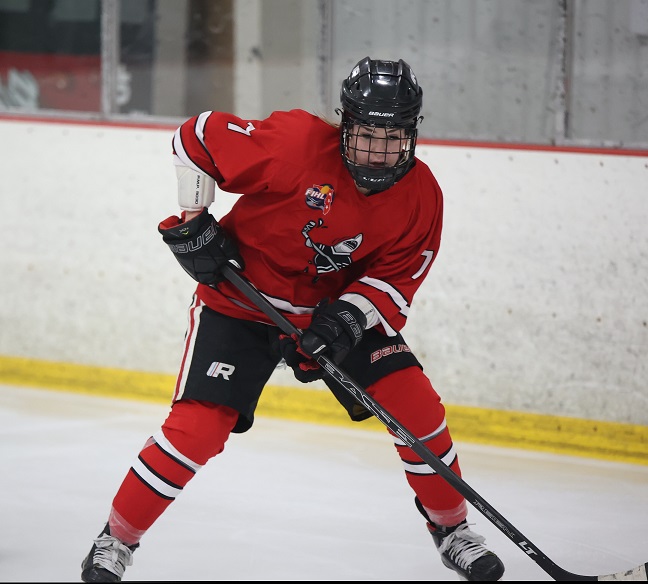 In the battle of the streaks it was the Sand Sharks and Minute Men that were victorious Saturday night as the Rays woes continue and the Aces fall in the Shoot Out.

The FIHL’s fatal four way league is nothing short of storylines as week nine saw two teams trying to snap losing streaks and two teams trying to extend winning streaks. In the first game the Sting Rays who own the longest losing streak of the season at six games were desperate for a win against a Sand Shark team that was missing their leading scorer in Jayveer Doad. Hopes started to falter quickly before the game as it was reported that Sting Rays leading scorer, Chandler “Cha Ching” O’Dell was stuck at the Pasco County border with visa issues. He never made it to the rink and the Rays had to take on the Sharks without the league’s leading scorer. One player who did not have visa issues was Alicea MacDonald who made her season two debut out of Canada as a sub for the Sharks, opening the scoring for her team at about eight and a half minutes into the first period. Phenex Hauver would shoot the puck from the top of the circle with MacDonald getting the tip that fluttered over a sprawling Ty Schmidt. The Sting Rays would tie it just two minutes later after Tristan Barnard would send Noah Gawel on a break away where he would beat Sharks net minder Sean Gaffney clean for the knot up. The Sting Rays could not get out of their own way in the waning seconds of the first stanza however, and they allow a speedy Matthew Wallace(s) to skate right in for the go ahead goal with eleven ticks left on the tock. New comer Braden Robinson would register the assist for his first of two points on the night in his debut. The period ended with the Sharks up 2-1. In the second period the Sharks score just thirty seconds in as Julien Mesa gets the goal with assists going to Frasquillo and Cholnik. Things would remain back and forth until Matthew Wallace would strike again at the 8:40 mark after being let loose by a Johusa Guay feed, Mesa also with the assist and it is now 4-1 Sharks. Mere seconds later Wallace would complete the hat trick to make it 5-1 and the Rays were losing ground but this is the FIHL, and goals can come in bunches and no game is over till it is over. The Rays would close the gap to three as Tristan Barnard sends Joey Poweska and Logan Brann off on a two on one that they executed to perfection, Brann with the tally to close the gap to one. Nate “The Milk Man” Salazar, less than a minute later closes the gap to two with a snipe and the Rays are battling back. The Sharks come back with another MacDonald goal which is followed almost immediately by another Rays goal scored by Mattew Babcock(s) and with six goals scored in about five minutes, we went from a 3-1 game to a 6-4 game, still in reach for the Rays. Sharks Captain Matthew Clark would get one more for his crew before the period ended on a nice rush down the ice and wrister just inside the blue line and we head to the third with the Sharks on a roll, 7-4. The Stingers opened the second period on a power play that saw Babcock off the opening face off skate right downtown and bury the biscuit for the fast strike cutting the lead back to two. Sadley for the Rays it would be their last tally as Gaffney stopped their remaining thirteen shots and Mesa would net two more for his hat trick and Wallace gets his fourth of the night and this one ends, 10-5 in favor of the Sharks. The Sting Rays continue their sick paced special teams going one for one on the power play while the Sharks failed to score on their only chance.

In the second game of the night the red hot Aces were going up against everyone’s favorite militia, the Minute Men. This one was billed as a marquis game and it did not fail to deliver. Like a main event in the world of wrestling one team came out swinging and that team was the Minute Men. Brendan Burgess would strike on a wicked wrister just :42 seconds into the game with no assist and the Men were on top early. Three minutes later the duo known as the MBI, Macris Brothers Incorporated, went to work and tied the game with Michael setting up Alex but thirty second later the Minute Men returned fire hitting paydirt as Burgess would score a flukey kind of goal as his tough angle shot goes off a defender and slides slowly past an unaware Keegan Lentz in net for the Aces. Alex Macris would tie it up before the end of the period when Jack Zerfass chips him the puck and he walks out of the corner unchallenged and snipes Saunier for the goal. The period would end 2-2. Two minutes into the second period, the Ferris Wheel of Love would give the Aces the lead on a sick far corner goal, catching Saunier deep in her net and unable to stop the heat seeking back hander. Burgess would tie it up six minutes later to seal the hat trick before leaving the game with a deep bruise form an uncalled slash to his wrist. The cagey first line General for the Minute Men draws attention and is quickly developing into a constant threat when on the ice and his Hat Trick in this game was huge for the Men, on a night where their leading scorer, Wyatt Frontiero, would end up pointless. The battle would ensue in the 3-3 game until the Minute Mens George Brkljacic would score a short side snipe on a rush in from a Ryan Compton pass and the Men had the lead once again. Second period ended with that 4-3 score in favor of the Militia. The third period was a story of discipline and composure as the team that kept it together was bound to get the W. Just one minute into the third period, Connor Johnston Ferris was found at the top of the crease writing a best selling novel titled, “How to Make the D Look Bad.” set up by the MBI and all day to make his decisions, Ferris took the shot only to have the save made by Saunier, but the rebound came back to him and with a little broccoli, it was stuffed in past the panicked net minder. Much of the third was a chess match as each team was playing match ups and posturing for opportunities. It came for the Minute Men with Michael Macris in the sin bin as Jonny “Whatsa” Motta “U” would sail a shot from the point into the far corner the goal tender never saw thanks to being completely screened by the Minute Men’s Side Show Bob. With six minutes to kill for victory, the Minute Men were looking to load the cannons but it would be the cannon of CJF from the point that was tipped past Saunier by Alex Macris for game tying goal and the hat trick. The battle ensued to the final :11 seconds where all hell broke loose in the Minute Men crease that resulted in one game ejection and an entire fan base standing at the glass to see what would happen next. Overtime is five on five for five minutes, and while the Men dominated, the Aces continually broke up the eventual scoring chances. Alex Macris would put the Aces at a two man disadvantage with a cross check for the final minute, but again, the Aces held of the blizzard of bullets and forced the game to the first ever FIHL shoot out game. The Minute Men were up first and George Brkljacic scores on the first attempt with a quick five hole goal for the score. The Aces Nate “The Milk Man” Salazar would go second but left spilt his milk before reaching the net for the automatic DQ. Side Show Bob would go next for the Men and would miss the net wide left with a quick wrister. The Ferris Wheel of Love goes for the Aces and suffers the same fate as the Milk Man. Kyle “Le Grande” Fanelli is the Minute Men’s third shooter and he suffers the same fate as Side Show Bob. Down 1-0 in the shoot out, the Aces called on Jack Zerfass to keep them alive, but he too, loses control of the puck and flicks a weak wrister on Saunier that she shoves aside and the Minute Men get the W. The Aces were 0/5 on the PP while the Minute Men were 1/6. The crowd was standing and it was quite the exciting finish. The Aces remain in first place despite having the same record as the Minute Men due to goal differential, even though the Minute Men have the season series edge, two games to one.

That is all from FIHL Head Quarters here tonight! We will see you all next week for the Aces and Sand Sharks and The Sting Rays vs Minute Men.