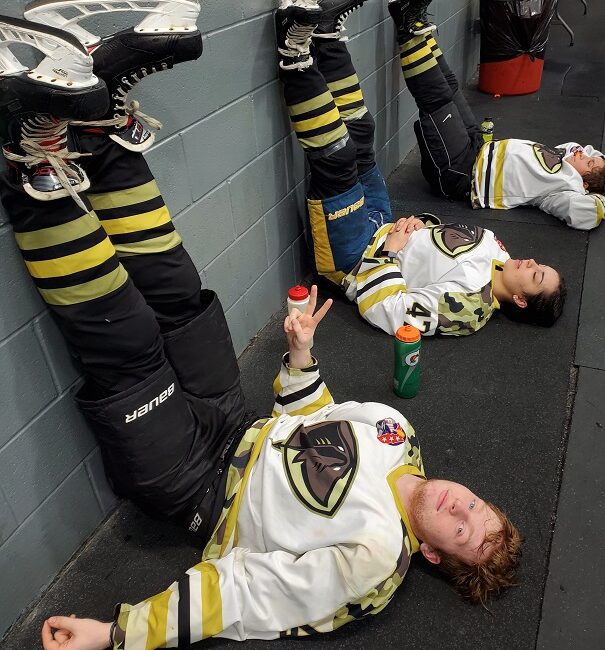 We are down to three games left in the inaugural season and this weeks game was a couple of blow outs that were over in the first period! We will make the recaps quick this week and then cover a few goodies.

In game one the Sand Sharks came out and feasted on a depleted Sting Ray defense scoring five goals in the first period. It looked like their might be a chance after the Rays scored a power play goal off the stick of Ben Morgan to cut a 2-0 Sharks lead to 2-1 but within a minute Beaudy Beaudin would rattle his second of the night to make it 3-1. Beaudin would wind up with the hat trick scoring the first goal of the second period in the first minute of that stanza. Gillum and Sherman would each pot a pair along with three other Sharks scorers for the ten spot. Rays picked up a shorty in the second from Kaine Otterbacher who would later take a nasty spill into the end wall, knocking the wind out of him. He resumed play a few shifts later and was able to finish the game. Braeden Blosouski showed some of the promise Coach Guay had hoped for as he scored a nice goal off of some gritty work in the corner, unassisted. Outside of that, it was a game the Rays would rather forget. Rays netminder Jason Cribbs faced over seventy shots for the third time since joinging the team. Injured Rays netminder Ty Schmidt was in attendance and worked the Sting Rays penalty box. The patch work roster of the Sand Sharks continues to roll out win after win. They will square off next week against the Minute Men…

The Minute Men put on a clinic in game two, dominating every corner of the ice for a full sixty minutes, out shooting the Aces 60-30 and lighting the TBSA non existent goal lamp nine times. The Aces were missing the Flying Female Aces as they were away prepping for Nationals and it showed. The Minute Men had a full compliment of militia and picked up goals from six different shooters, including five goals from their second line. Side Show Bob had a pair as well as Andrew Harmon and the Captain, Maxwell Mondo. They went two for six on the powerplay and got the eventual game winner from George Brkljacic. The Aces had a first period goal from the FIHL’s leading scorer, Josiah Martinez. The goal came after the Men broke things open with three goals in roughly three minutes to grab a 4-0 lead with 4 minutes left in the opening stanza. Frosty the Goal Man would snap up a long shot from the blue line and catch John Thompson sleeping for the Aces only other goal late in the third. For Thompson, it was his best outing of the season nailing a .933 save percentage, stopping 28 of 30 shots.

The winner of the Brayden Point Autographed Jersey complete with certificate of Authenticity, was Kaine Otterbacher! We raised a little over Three hundred dollars which will go towards the playoff bill. Thank you so much for everyone’s participation and we will see what we can come up with for this weeks game!

The Minute Men fell to the Heat Sunday night in the Heat vs teams of the FIHL scrimmage series, 6-4. The Men did not have a full compliment but played a great game none the less and save for a bounce or two here and there and an empty net goal, it could have gone either way. The scrimmages with the Heat have been good, and I expect to open talks with the organization on how they would be able to be a part of the FIHL Season II.

I am looking for players for this Thursday night in Brandon at 830pm for another scrimmage against the biscuits. Last weeks scrimmage was well played by the crew that assembled and picked up a 5-3 win. Please email me if you are interested, as always first come first serve on these, this weeks scrimmage cost is $30.00.

I will be setting up the playoff schedule this week. The games will be SATURDAYS AND SUNDAYS and should begin May 22nd. The first round is a best of three games and the Finals will be a best of five. Seeds are not yet determined as seeds two thru four are still to tight to call and most likely will go down to the final game of the regular season to be determined.

OK, that is all I have for now. Look for an update mid week, possible breaking news on another FIHL player leaving the FIHL nest, enjoy the stats and everything else! PEACE!!