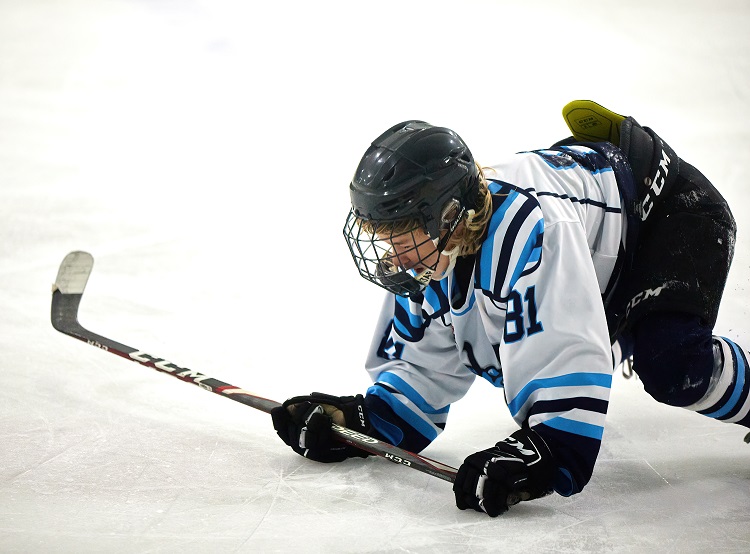 Saturday was the night before the All-Star Sunday Event and the regular season FIHL games saw Sunday’s team mates playing against each other for the All Star tune up!

In game one the Aces squared off against the first place Sand Sharks.  It was the first time this season that both teams had their entire rosters in attendance for the tilt.  Both teams came out flat and the pace was slower and choppy compared to normal FIHL games.  Even still, the Sharks took advantage of the lack of chemistry on the Aces bench and took a 1-0 lead five minutes into the first period.  League leader Andre Bobowicz scored his seventeenth goal to reclaim a share of the league lead in goals scored with team mate Nathan Souza.  Five minutes later Christopher Maybury also scored—the first of two for him on the night, for a 2-0 lead.  Beaudy Beaudin just three minutes into the second stanza would score the first of two goals for him as well, to make it 3-0.  Add Maybury getting that second goal just one minute later and a 4-0 lead causes the Aces the call a time out to try and right the ship.  It worked as the Aces were able to answer the coaching staff just a minute later on a goal by Gus Komarek which was set up by the FBI. (Fox Brothers Inc.).  The rally was short lived though as the Aces cough up a short-handed goal by Beaudin, completing his two-goal performance on the night.  Your score is now 5-1 at the end of two.  In the third, the Aces gave up a goal 4 minutes in with Chadwick Sieler rippling the twine.  The Aces fought back in the efforts to create some sort of rhythm and scored fifteen seconds later as Josiah Martinez zipped one past Basalari.  They would score again two minutes later with a Jaxon Law goal and it started to look like the Aces were going to climb back in making it a 6-3 affair. Three minutes later however, the Sharks Nolan Borek made it 7-3 and Christopher Chan would score his first goal in the FIHL on a power play to make it 8-3.  Gavin Frost added a goal exactly one minute later and the game would end with an 8-4 score favoring the first place Sharks.  Noah Arrison, Jack Forbes and Diego Garcia all had a pair of assists in the effort and Gus Komarek racked up six minutes in penalties to add to his goal for the Aces.  An interesting game to say the least as both teams lacked any kind of pep in the step and if you’re playing the FIHL’s best, you will need at least that.

Game two saw the Minute Men demolish the Sting Rays by use of the substitute clause.  Missing six players due to injury and outside league events, the Men called in the Calgary, which was led by Nathan Behm scoring his second hat trick against the Rays as he played for the Aces last week as a sub. The other substitute players of Connor Hill and Braeden Blozousky, in his FIHL debut, each had a pair of goals in a performance that saw the Minute Men rack up a ten spot on the Rays.  The Rays were missing only two players in the game and while the Rays lead this game early in the second period 2-1 on goals by Chandler Odell and Erik LaFlamme, four unanswered goals by the Minute Men made sure the Rays never recovered.  Max Mondo and Alex Noti would score as well for the Men and team leading scorer Wyatt Frontiero would score his fourteenth goal of the season for the Minute Men’s tenth goal, adding insult to injury.  Chandler Odell would finish the game with 2-0-2-8 totals and the Minute Men would go three for eight on the power play.  Poweska and McDuffie would also score for the Rays.  On the last save of the game, Rays never say die net minder Ty Schmidt made a huge save but was injured in the process.  The Rays are waiting on an MRI report for the extent of the injury.