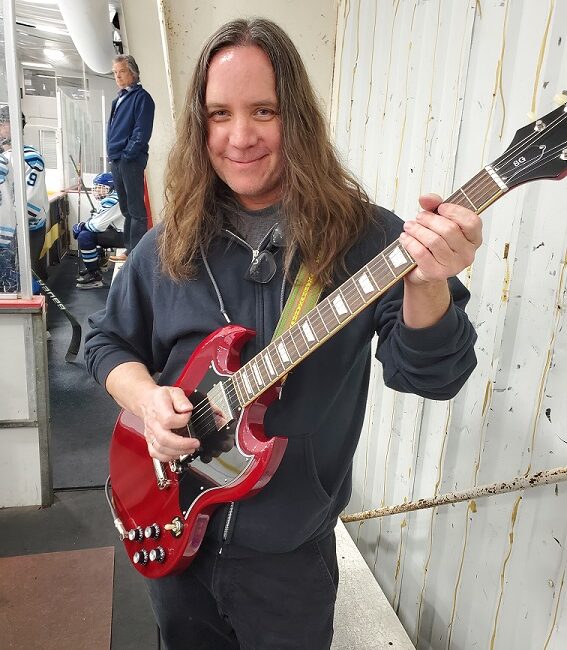 We are down to the final four games of the sequel season and the we have a three-way tie for first place with the Sand Sharks only trailing by four points.

This week’s games featured the Sting Rays vs the Minute Men and the Aces taking on the Sand Sharks as all four teams are battling for a playoff seeding that is surely not to be determined until the final games are played.

In game one the Sting Rays who once found themselves on a massive losing streak, have now won eight games out of their last ten and climbed into a share of first place in the FIHL.  The Minute Men began the scoring when Joey “The Big Dog” Soroukas jammed home a poke pass from Julien Wojcik fourteen minutes into the opening stanza.  Two minutes later the Sting Rays battled back to tie it when Chandler O’Dell, who is on a wicked tear and on his way to smashing all FIHL scoring records, buried his first of seven goals on the night.  Wyatt Frontiero would go end to end just sixty seconds later for the Militia to regain the lead, and then set up Joey Soroukas 30 seconds after that, for his second of the night and the first two goal game of his FIHL career.  With it looking like a solid 3-1 lead with six minutes left in the first period, the combination of Evan Kirk and Chandler O’Dell would go to work scoring three unanswered goals, one for Kirk and two for O’Dell.  The Rays take a 4-3 lead into the second and nail down two more goals to make it 6-3. O’Dell gets his fourth and Connor Hill scores the other. The Minute Men respond with a coast-to-coast rush by Ryan Compton, only to have the Rays take it right back with yet another O’Dell snipe. Mario Romero scored at the 8:11 mark of the third to make it 7-5 and the Minute Men were looking to make the comeback. Chandler O’Dell wasn’t finished though and netted his sixth on the night with under a minute left in the period and the third period begins with the Rays up 8-5.  The Minute Men couldn’t muster much until the final minutes of that period when Jonny Motta would get the Men back within two.  With the goaltender pulled, O’Dell scales the puck nearly the entire length of the rink for the empty net goal, the salt in the wound, and the final nail in the coffin. The losing goaltender Lucas White did score an assist on the Motta goal, The Minute Men went 0 for 3 on the power play while the Sting Rays went 2 for 3 on the man advantage.  The win put the Rays into a share of first place with the Minute Men and the Aces, who also dropped their contest tonight vs the Sand Sharks.

The Sand Sharks enjoyed the live guitar riffs of John Gaffney, including the national anthem to start the second game of the night.  John is the father of the Sand Sharks Goaltender Sean Gaffney and the FIHL was happy to have him and his axe in the time box for game two.  The Sand Sharks have also been enjoying the return of Beaudy Beaudin as he, Lex Petrov, and Jonathan Cholnik would figure in nine of the ten goals scored by the Sharks in this match up. They scored the first two goals as Petrov would net the first and Beaudin the second, both assisting each other.  The Aces had their dominators as the Law firm Macris, Macris & Ferris figured in all eight goals scored by the Aces.  The came roaring back after the Sand Sharks opening salvo and score three unanswered goals.  Two for the Macris known as Alex, and one for Ferris.  Beaudin would answer the second Macris goal with his second on the night, but Macris again would put the Aces back on top with 1:22 left in the period, taking that 4-3 lead into the second period. It would take about fifteen minutes into that period for the Sharks to tie it up when Jonathan Cholnik would take a Beaudin feed in the slot and jam it home, giving the Sharks the equalizer.  The Aces answered in just over a minute however to retake the lead when the Macris known as Michael would score his first of three on the night and it is 5-4 Aces.  The Sharks however, would score three goals in less then a minute, in the final minute and a half of the period to take a 7-5 lead into the third period.  Petrov, Beaudin, and Cholnik get the goals in that order and a stunned Aces head to the locker room wondering what just happened.  It took five minutes into the third period for the next goal to be scored which was courtesy of Leah Kringle as she put the Aces back within one.  Beaudin answers minutes later to reopen the two-goal deficit for the Aces, but then Macris the Michael pulls the Aces back within one again.  Beaudin reopens the two-goal deficit yet again just seconds later, only to have Macris the Michael complete his hat trick and get the Aces back within one yet again, with five and half left to play.  The Sharks get the tenth and final goal of the game as Christopher Chan scores on his own rebound as he and the Sharks hold off the Aces in the final two and half for the win.  Each team only had one chance on the power play and only the Aces capitalized.  The loss for the Aces created the three-way tie for first place with four games left in the FIHL’s second season.