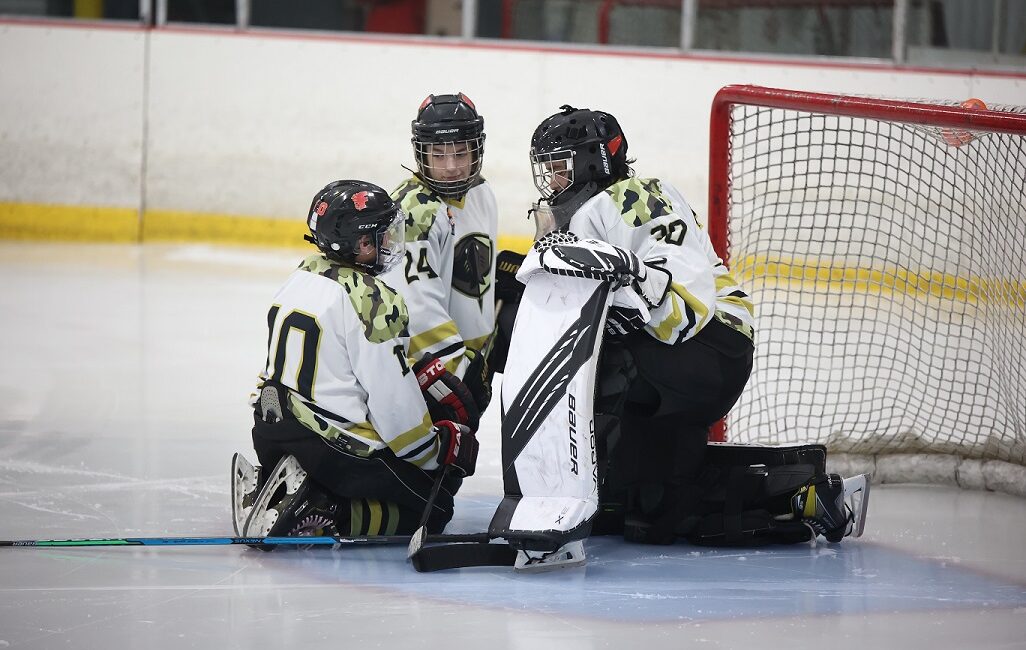 With just three games to go there is only four points that separates the top from the bottom.

This week’s games featured the battle of the fish and the war machines as the Sharks took on the Sting Rays and the Minute Men battled the Aces. So much at stake in these final games as the eventual playoff matchups have yet to be determined. In the first game it was the red-hot Sting Rays with lead leading Chandler O’Dell and his 69 goals taking on the surging Sand Sharks. The Sand Sharks however were extremely shorthanded due to five players attending the USA Hockey Deveolpment Camp in–not Miami, someplace near Miami. The Sting Rays appeared to have in the lineup, all the needed tools to make quick work of the Sharks, but would they? Only one goal was scored in the first period however and that goal did belong to the Sting Rays as Logan Brann would pot the first of two on the night on a nice pass from O’Dell. No infractions were recorded for the first period as well, and we head to the second with the Rays clinging to the 1-0 lead. In the second stanza, both teams would come to life scoring three goals each–the first four in a three minute span mid way through the period. The Sharks went first for the tie when Connor Hill slipped a wrister past Ty Schmidt from the high slot after being sent to the races by Andrew Cross. Thirty seconds later a Lex Petrov pass from behind the Sting Rays net caroms off the skate of Dylan Sinclair and past Schmidt and into the net for the Sharks first lead of the game. The Rays answered back just over a minute later When Chandler O’Dell scores his 70th goal of the season on a nice pass from Joshua Guay. Once again, just a little over a minute later, Logan Brann gets his second to help the Rays retake the lead, 3-2. The goal was the product of some nice passing from Matthew Babcock and Savannah Scianna, with Brann finishing the play. At the six minute mark of the period, Tristan Barnard would hook Connor Hill enroute to the net and Hill would be awarded the penalty shot to which he would bury past Rays netminder Jason Cribbs, who was in for the second half of the game. That goal tied the game at three but the Rays were not done. Cribbs paddles the puck to Brann who would feed a zone leaving O’Dell for the rush and tally for yet again, a one goal lead for the Rays. The period ends 4-3 in favor of the Rays. In the third, the ever prolific O’Dell would be stymied, and with Lex Petrov setting up two more goals for the Sharks for his hat trick of assists, the Sharks would sting the Rays with an unexpected win by a score of 5-4. Connor Hill and Dylan Sinclair would get those tallies, both teams failed to score on their power plays and The Sharks made a case for not finishing in fourth place as they are now just two points away from second place. A win next week against the Minute Men would pull them out of the basement, with just two games left.

In the Main Event of the evening, coupled with the Sting Rays loss, the Aces and Minute Men would battle it out for sole possession of the top seed, for this week at least. The Minute Men were also without their standout defensemen Jonny Sweet “Potato” Motta, as he too was gallivanting about in a town down Miami way, with the missing Sand Sharks. The Minute Men came out swinging, as they shut out the Aces in the first period, scoring three goals and giving up none. Cody Mello would get his first goal in the FIHL as he took a Side Show Bob pass to the point and teed it up for the slapper that slipped past Keegan Lentz and the Minute Men were on the board in… well, just over a minute. Wyatt Frontiero would make it two to nothing as he calls for and accepts a pass from the Aces Defense, walks right in and picks the corner for the snipe and the two-goal lead. For Frontiero, it would be his first of three on the night. Again, in just about a minute, the Men would score again when Julian Wojcik picks a puck and makes a wide move on the netminder before ripping it upstairs for the Minute Men’s third goal and the opening stanza would end that way. Late in the first period however it looked as though the Aces may have gotten on the board with an Alex Macris snipe, but video review was inconclusive and showed the official well in position for the call on the ice which was indeed, no goal. In the Second Period, the Minute Men wasted no time and score again just about a minute in. Wyatt Frontiero goes end to end and jams it between the pads for the score, no assists on the play and it looks like we are on our way to a major ripping of the Aces. The Aces however had other thoughts and began an impressive comeback calling on their go to guys, Macris and Ferris. Ferris would get the party started as he rips a top shelf snipe over Lucas Whites shoulder with Alex Macris getting the helper. Less than a minute later Ferris returns the favor and feeds Alex the biscuit for the first of four goals on the night for the elder Macris, and just like that the Minute Men lead is cut in half. The Minute Men respond though when Wyatt Frontiero makes another patented end to end rush. Lentz makes the crazy save but Andrew Harmon comes in and scoops the rebound into a practically empty net for the score, Connor Johnston Ferris just out of reach, had to watch it sail in, and the Aces are back down by three again. Not to fear though as Macris gets his second on the night unassisted and then less than a minute later with Wyatt Frontiero in the box, the Aces put the power play to work. The Ferris Wheel of love snipes once again like cupid’s arrow, precise and lethal, to give the Aces the power play goal and they pull within one for the first time since the first minute of the game. The period ends 5 – 4 Minute Men. Having seen a four-goal lead evaporate, the Minute Men got just what the doctor ordered at the end of the second period and that was a penalty on the Aces top player, Alex Macris. The Men were horrible however, not scoring a single shot on net in the power play and as soon as it was over, the Aces struck again to tie the game. Leah “Peanut” Klingel takes a Talon Bouchey perfect pass in the high slot and rips it five hole on White and the Aces have tied the game at five. Four minutes later the Minute Men begin an all out assault that would start with Side Show Bob nailing down a short handed goal as the Minute Men net minder was assessed a double minor just seconds earlier. That was followed by an epic trickling goal by Braden “I dont Celly” Spencer scoring his second goal of the season. Last but not least, Wyatt Frontiero scores right off a offensive zone draw with the giant slapper to complete his hat trick and give the Men a three goal lead once again, and it looks like with five minutes left, this one is in the books. The Aces had other thoughts though, and once again call on Macris to do it again–and do it again he did. Two goals for Alex in the next two minutes and the Aces have nearly three minutes to tie the game and send it into over time… but the Minute Men hold them off, and clamp it down. The Aces went 1 for 3 on the power play while the Minute men went 0 for 1 and the game ends with a wild 8-7 score.

Next week the Minute Men could put two teams completely out of first place contention with a win over the Sharks, and with the Aces and Sting Rays having the same record, that game will be a war to keep pace, or if the Sharks pull off a win, reclaim a share of the top spot. We will see you all there, Sunday afternoon starting at 330!