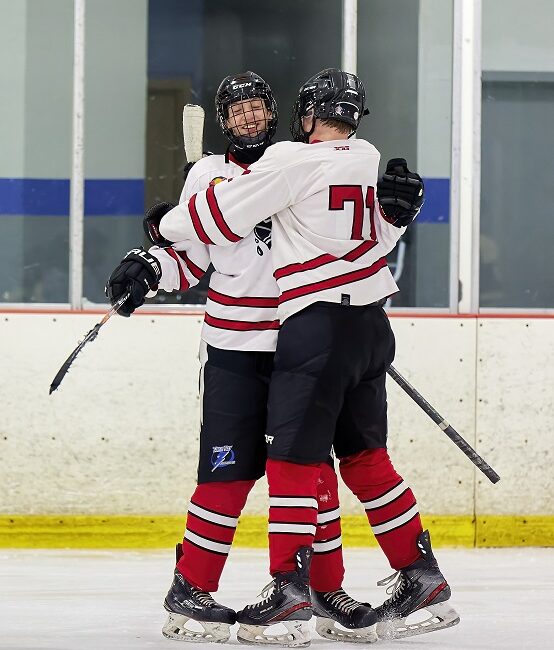 It was a double header weekend in the FIHL and the team that emerged as the leagues best was none other then the reigning, defending and undisputed FIHL Champion Sand Sharks!  The Sand Sharks not only won both of there games in the double header but did it by knocking off the FIHL’s top two teams in the Aces and the Minute Men.

In the first game of the four-game weekend the Sharks toppled the high-flying Aces in a high scoring affair.  Lex Petrov would lead the Sharks with a hat trick and six other Sharks rippled twine, showing off the Sharks new found depth.  Recent signings of Andrew Cross and the stellar play of subs like Matthew Wallace have given the Sharks a much-needed punch.  The Aces actually led this game headed into the third period 6-5, but the Sharks poured it on in the third, out scoring the Aces 5-1.  Despite four goals from Alex Macris, the Aces could not continue the hot hand they had in the second stanza and succumbed to the Sharks for a final score of 11-7.

In game two, the Minute Men got a hat trick out of Connor “The Mountain” Hill to help lift them past the Sting Rays, with the third goal making FIHL History.  Chandler O’Dell would tie the game with five minutes left in the third with his third of the game, after the Minute Men saw their top D Man Wyatt Frontiero ejected for a high hit on the league’s leading scorer. For the Minute Men, it was their second player of the game ejected.  In the over-time is where Hill would create some FIHL History as he was awarded a penalty shot when Matthew Kramer threw his stick in an attempt to disrupt the speedy and edgy Hill.  The shot was successful and the first ever game to end by penalty shot goes in the books.

Game three saw the Sand Sharks beat an uninspired Minute Men team despite the return of George Brkljacic, last season’s Team MVP.  He delivered a hat trick for the Men but the Militia would never overcome five firs period Sand Shark goals.  Jonathan Cholnik had a hat trick and Peyton “Scrappy” Brisley and Jonathan Pohnel each would pot two as the Sharks sink their teeth into the Minute Men, beating them 11-5.  The Sharks two wins pulls them to an even record with Sting Rays, after the Sting Rays dropped both games this weekend, both by one goal.

Game four was that second loss for the Rays who came into the double header weekend the FIHL’s hottest team on a five-game winning streak.  In a crazy game that was short benched on both sides, thirteen goals were scored by just two players. Chandler “Cha Ching” O’Dell scored seven and Alex Macris would net six!  O’Dell is averaging a ridiculous 3.25 goals per game and leads the league with 39 goals.  He and Aces Standout Connor Johnston Ferris are the first players to hit the fifty-point club this season with still 8 games to go, only three people made that mark last season, O’Dell being one of them.

So, things are tightening up as we sign new players to fill in the holes and rosters become solidified.  Eight games remain in the season and just three games to the trade deadline!  We will see you all next Sunday night for games 35 and 36!