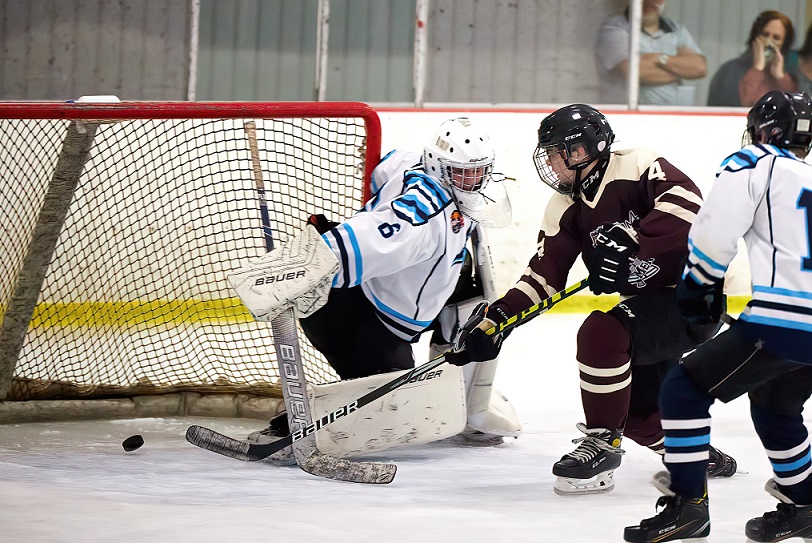 The FIHL was back in action after the Thanksgiving break with matchups at Tampa Bay Skating Academy on Saturday, December 6. The Sting Rays were looking to hand the Sand Sharks their first loss of the season, while the Minute Men were shooting to break a five-game losing streak against the Aces.

In game one, the Sand Sharks swam by the Sting Rays 8-5 in matchup that saw the Sting Rays within striking distance of the Sand Sharks for the majority of the game. Griffan Kirkham put the Sharks on the board on a goal with 9:19 left in the first period. Christoper Maybury gave the Sand Sharks a 2-0 with lead when he netted a goal with 17:40 left in the second period, and Ryan Tanner followed with a power play goal with 14:39 left to give the Sharks a 3-0 lead. But the Sting Rays fought back with a goal by Erik Laflamme at the 11:36 mark and one by Alex Myers with 7:51 left in the period to cut the Shark’s lead to 3-2. The Sharks closed out the second period with a goal to by Andre Bobowitz at the 1:45 mark to take a 4-2 lead heading into the final twenty minutes of regulation time. The Sting Rays opened up the scoring in the third period on a goal by Richard Poweska at the 16:27 mark to cut the Sand Shark’s lead to one goal. A little over a minute later, the Sharks answered on a goal by Nolan Borek to take a 5-3 lead. Kane Eanes, who was making his FIHL debut, put the Sting Rays within one when he scored with 13:55 left in the period. But once again the Sharks answered with another goal by Bobowitz at the 10:27 mark to give the Sand Sharks a 6-4 lead. Bobowitz completed the hat trick at the 3:15 mark, giving the Sharks a 7-4 lead before Chadwick Sieler sealed the game for the Sharks on a goal with 2:05 left in the period. The Sting Ray’s Eanes completed an impressive debut with his second goal at the 0:33 mark to go along with his two assists on the night. The Sand Shark’s Julian Pontoni also had two assists. Shots on goal were Sand Sharks 57, Sting Rays 30. In the second game, the Minute Men marched past the Aces 7-5 in a matchup that was tied a little over halfway through the third period. The Minute Men took an early lead on a goal by Vlad Handjiev with 19:22 left in the first period. The Aces answered on a goal by Nolan Borek at the 16:27 mark. The Minute Men took the lead when George Brkljacic netted a goal at the 8:28 mark. Wyatt Frontiero put the Minute Men ahead 4-1 when he scored with 5:57 and 2:50 left in the first period. Handjiev scored his second goal of the night with 19:36 left in the second period to give the Minute Men a 5-1 lead. But the Aces fought back with goals by Michael Scianna and Josiah Martinez to cut the Minute Men’s lead to 5-3 with 5:40 left the second period. The Aces’ Jaxson Law (assisted by Borek) scored with 17:38 and 12:27 left in regulation to tie the game at 5-5. The Minute Men’s Brkljacic scored his second goal of the night at the 8:46 mark on a nifty blind pass to the slot by Frontiero after he ran out of real estate on a break in, and Alex Noti netted a goal with 4:06 left in regulation on a break away to give the Minute Men the 7-5 victory. The Minute Men’s Side Show Bob had two assists on the night. Shots on goal were Aces 46, Minute Men 44.