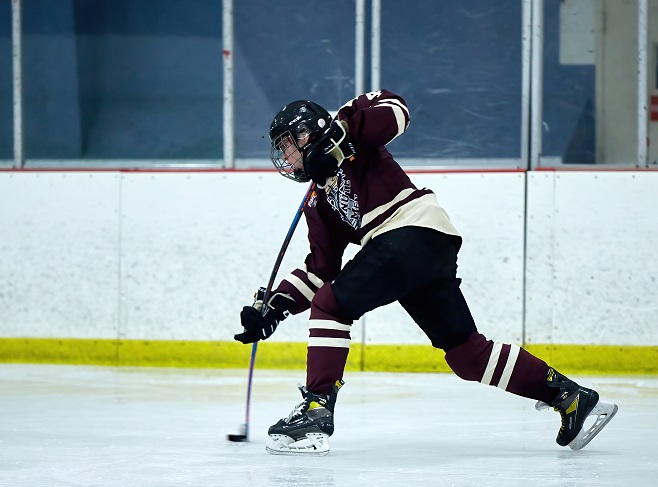 The FIHL set up shop at the Clearwater Ice Arena again this week before heading back to TBSA for the remainder of the season. Their last visit of the regular season saw a pair of one goal games with nail biter finishes.

In game one the Sting Rays took on the Sand Sharks and being the only team with wins against the Sharks, was looking to get their third one, and snap a major losing streak. The Sharks struck first with the only goal of the first period as Hunter Gillum rippled the twine with just two minutes in the stanza. The Rays came to life in the second period scoring four goals to take the lead and keep it heading into the third period to answer the Sharks two second period goals. Four different scorers for the Rays as Poweska, Odell, LaFlamme, and McDuffie potted pucks for the boys in camo. The Sharks had goals from Bobo and Smalley, for Smalley the first of a hat trick for him on the night. The Sharks came back in the third with a vengeance with four unanswered goals to answer a quick strike by the Rays by Jackson Payne, in the first minute of the period. Souza scored on a near perfect give and go with Brayden Curry followed by another goal for both Bobo and Smalley. That took the lead away from the Sting Rays for the last time. Christian Sherman would add a shorthanded goal at the 12:48 mark and Smalley would complete the hat trick to make a 5-3 Rays lead turn into a Sharks 8-5 lead. But the Rays never seem to go away quietly and goals from Cha Ching Odell and Hayden Kimmel would make it 8-7 with 3:50 left in regulation. It was mayhem for sure as the Rays scrambled to score the equalizer but could not get it to go and the game ends with another Sharks one goal win. Another high shooting affair as the Sand Sharks out shot the Rays 66-59.

Game two between the Aces and the Minute Men saw almost an identical playout with the Minute Men playing the role of the Sting Rays but this time, holding on to the lead to get their second win in a row for only the second time this season. The Aces took a 1-0 into the second period on a snipe from Nathan Salazar over the the shoulder of John Thompson who had a deer in the headlights glazed look as the puck went in the net. In the second period, the Minute Men employed the services of what has become a cult in the FIHL, the Blue Buckie Line. Georgie Brkjlacic scores off the break out when he tries to center a puck from behind the net off a defender to get the rally started. Side Show Bob would get an assist on that goal and the next goal as well when he would dish the puck to Vlad the Dad who then would feed Maxwell “Smart” Mondo for another tally. The third goal would come off the stick of the Militia’s top scoring forward as Alex Noti would snipe Jacob Otto on a break away for the first shot he would see in the game. Now 3-1, The Men would add another goal late in the second period on a D to D point blast from Frontiero, but the Aces came right back to answer that one and stop the goal streak at 4 for the Men when Gus Komarek would score at 1:15 of the second ending the periods scoring for a 4-2 lead for the Men to start the third. The Aces would open the scoring in the third as Leah “peanut” Klingel would score her first of the season off a nice Delaney Zerfass feed, lasering a shot through a crowd over the shoulder of Thompson who may or may not have had a clear view, and it is now 4-3 Men. The Militia would return fire though on massive scramble out front that saw Hunter Chace score his second goal of the season, jamming home a loose puck amid the mass of humanity, 5-3 Minute Men. One minute later, Jaxon Law gets that one back to make it 5-4. One minute later Alex Noti would Knot his second goal of the game assisted by Robert Scire, 6-4 Men. Two minutes later The Aces answer again as Josiah Martinez would “Stache” a puck behind Thompson for the goal and the celly, assisted by new comer Tristana Doyle in her first game in the FIHL, just called up from Fort Myers. One Minute Later The Blue Buckies ride again, as Georgie pots his second of the game for the Minute Mens last goal of the game to make it 7-5. The Aces try for the comeback as team Captain Martinez scores his second of the night and period to close the gap to one on a walk in and snipe. With the score 7-6 the Minute Men had their hands full as penalties to Frontiero and Handjiev and a pulled goalie would create a 6 on 3 for the final minute of play. It was mayhem once again but the hockey gods were smiling on the Men as the puck danced around behind and everywhere but in the net until Side Show Bob finally sent it down the river as the clock ran out for the 7-6 Minute Men win. A low shooting affair as the Aces only tallied 25 shots to the Mens 38.