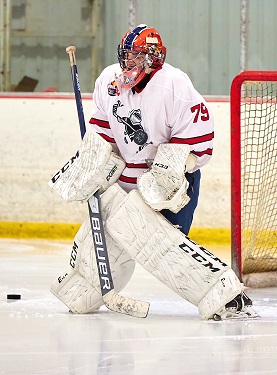 The FIHL was back on the ice at the Tampa Bay Skating Academy on Saturday night, November 7 with the first round of rematches as the Sting Rays took on the Sand Sharks and the Minute Men matched up against the Aces.

In the first game, the Sting Ray and Sand Sharks battled in a matchup that saw the undefeated Sand Sharks come out on top by a score of 7-6 when Andrew Shillings netted a goal (assisted by Jacob Ingrassia and Anderson Libby) with 1:03 left in the third period.

The Sand Sharks took a 3-0 lead in the first period and were leading the Sting Rays 3-1 going into the second period. The Sting Rays closed the gap early in the second period on a goal from William Johnston, but the Sand Sharks answered at the halfway mark on a goal by Nathan Souza to take a 4-2 lead. The Sting Rays battled back at the end of the period with a goal by Chandler Odell at the 2:26 mark and a powerplay goal by Tyler McDuffie with 14 seconds left to tie the score at 4-4. The Sting Rays took a 6-4 lead early in the final period on goals by Johnston (18:16 mark) and Andrew Burnside (power play with 16:01 left in period). The Sand Sharks answered with goals from Andre Bobowicz (14:35 mark) and Souza to knot the score at 6-6 with 9:51 remaining in the period.

In the second game, the Aces defeated the Minute Men 5-3 to even the matchup at one game each following the Minute Men’s 5-3 win over the Aces in their first meeting three weeks ago.

The Aces took a commanding 3-0 lead on goals by Chris Cowan, Jaxon Law, and Maddox Fox before the Minute Men got on the board when Side Show Bob scored with 5:11 left in the second period. The Minute Men’s Vlad Handjiev cut the Aces’ lead to 4-2 on his first goal of the season with 15:38 left in the third period. The Aces answered back with 6:50 left in the game on another goal by Fox with assists from Andrew Klingel and Gavin Frost, who had four assists in the game. The Minute Men closed out the scoring with 5:02 left in the game on a goal by George Brkljacic. The loss gives the Minute Men the first three game losing streak in FIHL history but the coach is not concerned and had this to say after the 5-3 loss, “We could easily be 4-0 at this point but we are being deliberate on making sure we are better prepared at game 25, then we are at game 5. We will be fine.” Shots on goal were Minute Men 39, Aces 39.