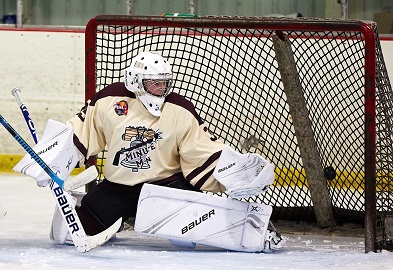 In what promises to be two very active match ups, the FIHL hits week five with one team undefeated by a hair, and one team riding a three game losing streak. Those two teams, the Sand Sharks and the Minute Men square off in game one at 6pm this Saturday at TBSA. In the two teams first meeting the Minute Men blew a four goal lead in the third period and wound up losing in overtime by a final score of 10-9. It was the leagues first overtime game and only took fifteen seconds and one shot to decide. The Minute Men will be looking to not only snap that three game losing streak, but also exact revenge on the red coated Sand Sharks for that OT loss. Coach Frontiero had this to say earlier today when asked about the match up, “It is what it is, we know we can beat them, in fact we were missing two of our top forwards that week as well. This week we are missing a top D, and will see how it goes. I expect a good game.” Rookie net minder John Thompson, (pictured), will get the start and has a lot to prove as he came into that last matchup in the third and gave up 7 goals in about ten minutes. “John will be ready. I can’t blame him for all seven but like alot of players here in the FIHL, they are here to learn and develop and will see how he responds to the opportunity.” The Sand Sharks lead the FIHL in almost every category and are 4-0 despite two very close one goal wins.

In game two which starts at 830pm The Aces battle the Sting Rays after evening their series with the Minute Men last week in a 5 – 3 win. The Aces saw the debut last week of half the FBI with Maddox Fox, he scored two goals to lift the Aces, making an immediate impact. Will the other, much bigger, half of the FBI be in the lie up this week? In or out, the Aces are owners of two wins and hungry for more. Meanwhile the Sting Rays are starting to hit their stride and nearly toppled the Sand Sharks last week blowing a two goal lead in the third period, including the game winner with just one minute left in the game. Missing fan favorite Erik LaFlamme who hopes to be in the line up this week, will add to the punch that will be needed to beat the Aces.

This weeks notes: The FIHL is looking for more players. The Sand Sharks are looking for three more players as well as the Sting Rays. The FIHL is always looking to add teams as well. All players added to the league that do not get assigned to a permanent team will be pool players and called when needed, paying per game. Contact Coach Frontiero at 727-804-0451 via text if you are interested. That is all we have this week, for Karis Fedor and the rest of the FIHL, I am Dekes Fiveil!