Week 6 Preview: The Girls are Back!

FIHL > News > Highlights > Week 6 Preview: The Girls are Back! 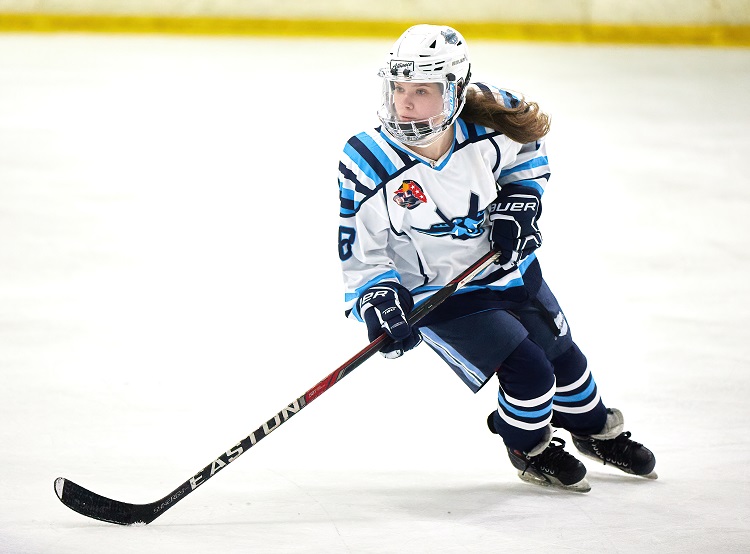 Week six match ups for the FIHL this week will mark the last games before the Thanksgiving break. They will be played at TBSA and will feature the undefeated Sand Sharks vs the Aces at 6pm and the hapless Minute Men vs the Surging Sting Rays at 830pm. (The press can be brutal). The biggest story for this weeks games though is the fact that the ladies of the FIHL will all be back in the line up.

We start with the Lady Aces. Led by the smooth skating defensemen Delaney Zerfass, she and Leah Klingel along with Savannah Scianna, (pictured), will all be back in the Aces lineup this weekend against the first place Sharks. Two of the Lady Aces are coming in off a 4-1-0 performance at the CCM World Invite Girls Detroit tournament. Zerfass and Klingel played in the U16 Tier 1 division going undefeated beating the likes of Belle Tire and Honey Baked, and outscoring their opponents 16 to 4 in the first four games. They lost in the playoff semi final though to Madison Capitol 5-1 closing out a bitter but successful trip to the motor city. Delaney Zerfass had this to say about the trip, “It was only our second loss of the year but I think we were looking past that game to the final. We are so used to winning and Madison was ranked lower then us.” Zerfass and Klingel will now focus on this Saturday as they will both be playing in their toughest challenge of their careers in the 2003/2002 born filled roster of the Sand Sharks. The Sharks lit up the Minute Men last week and are destroying the stat sheet, leading the FIHL in every category.

Savannah Scianna will also make that jump with her fellow Lady Aces as her and FIHL leading net minder Madison Saunier of the Minute Men played in the U19 tier 2 division, going 2-2 in their trip. For Saunier, she clocked in at 1-1-0 with a 3.50 GAA highlighted by a 8 to 3 win. She will get the start this week vs the surging Sting Rays, and the Minute Men are hoping that her return will spark a team that could very well be 4-1-0, turn the real record of 1-4-0 around. Coach Frontiero was not willing to comment after last weeks debacle against the Sharks and is focused on this weeks game vs. the Rays. For Saunier and the Lady Aces, the FIHL represents a much faster pace game and the challenge of playing against young men but they love it, and they are back, and they are ready, and both the Minute Men and the Aces are looking forward to seeing them back in their lineups.

We hope to see you at the games! Keep in mind that the FIHL is always looking to add players and teams. If you have interest, visit our league overview and registration site at tampayouthhockey.com and get in touch with league director Chris Frontiero. For Karis Fedor and all the of the FIHL staff I am Dekes Fiveil reporting from Goose Pond University, home of the FIHL front offices. Peace!