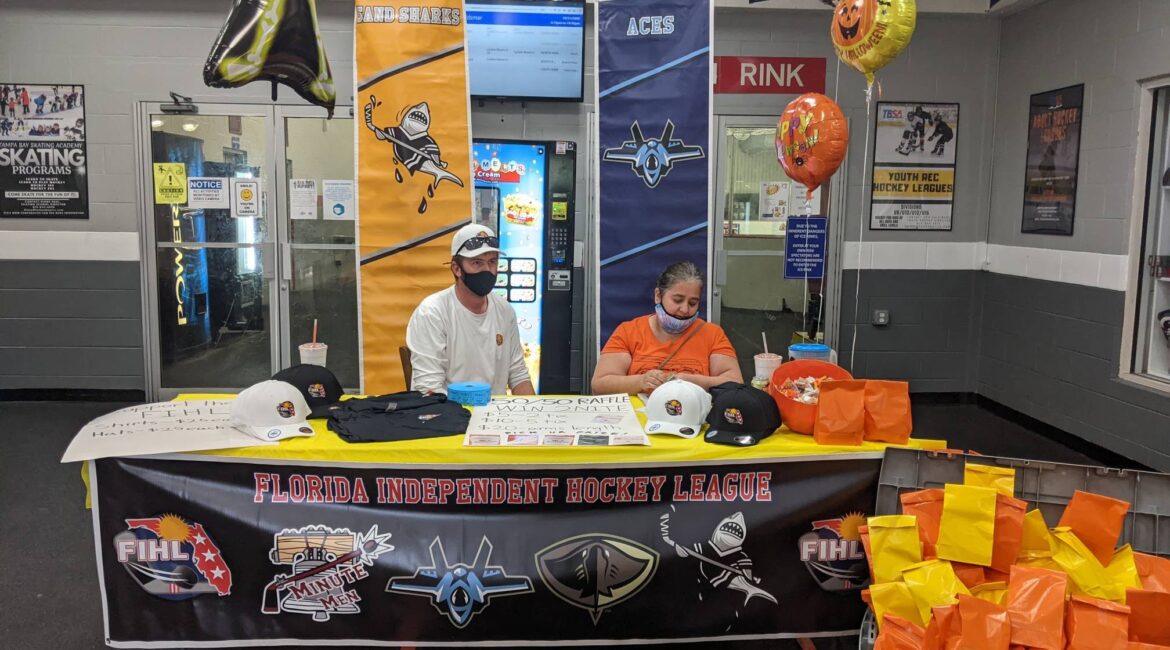 The FIHL was back in action on Halloween evening at the Tampa Bay Skating Academy with two match ups that provided both tricks and treats! In the opener, the Sand Sharks defeated the Aces 11-3 in a match filled with trickery, and the evening concluded with the Sting Rays treating fans with a hard skating game that saw the Rays skate past the Minute Men 7-5.

In the first game, the Aces got on the board first with a goal from Josiah Martinez with 12:58 left in the first period. But the Sand Sharks came roaring back a little over two minutes later with back-to-back goals by Nathan Souza and Dave Beaudin to take a lead that they would never surrender. The Sand Sharks ended the first period with a 5-2 lead and added three goals in the second and third periods on their way to an 11-3 win. Highlights for the Sand Sharks included hat tricks by Andre Bobowicz (four assists) and Beaudin (two assists). Souza and Chadwick Sieler each had two goals, and Julian Pontoni had two assists for the Sand Sharks. For the Aces, Martinez had two goals and one assist, while Gavin Frost added one goal and two assists. Shots on goal were Sand Sharks 60, Aces 44.

Notes on Week Three are as follows!

The Aces had 5 players out of the lineup and are still awaiting the debut of the FBI, (Fox Bros Inc.) Maybe they should tape a few vignettes or promos? Other players out were two of the Lady Aces, Zerfass and Klingel and D man Chris Cowan. The Sharks were missing three of their own as Aguirre, Ingrassia and Kirkham were unable to be in the lineup. Ups and Downs… The Aces had the first penalty shot opportunity in the FIHL as Chadwick Seiler hooked Jaxon Law for the call. Jaxon made the attempt but was turned away by Sharks Net Minder Sam Boardman. Sand Sharks Nathan Souza suffered his second ejection in as many games in the third period. Jack Forbes was also ejected from the Sharks vs Aces contest.

The Sting Rays had two players out this week in Burnside and Morgan, while the Minute Men were missing League leading netminder Maddi Saunier, and forwards Harmon and Harden. Ty Schmidt secured his first win of the season as well as the Sting Rays first win of the season with his shut out third period performance. Ups and downs… Sting Rays new net minder Aiden O’Kelly had an impressive debut stopping 20 of 25 shots in his first action only to exercise his exit clause and has left the FIHL. He will be missed.

Special Thanks to the Schmidt Family for an incredible job handling the front desk! (pictured) They did the league well and we had five out of the six gift cards claimed throughout the night! Our split the pot for the night was $90.00 and that winning number is 578031 which is also pictured on FB page! They also handed out 80 bags of treats which they bagged and prepped themselves to help make the FIHL Spookdracula a success!